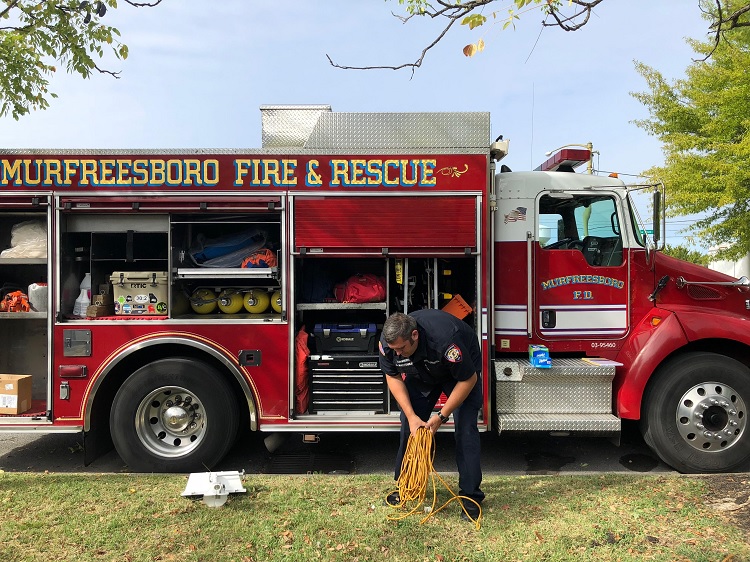 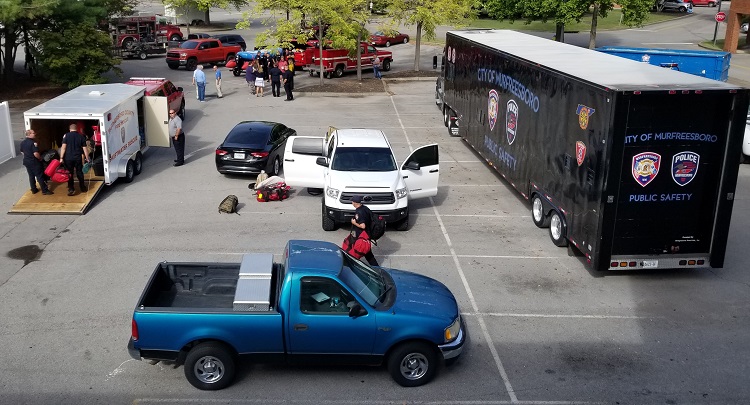 Forming a prayer circle to ask for safety for the crew and an ability to help those in need.

The caravan to South Carolina begins.

(MURFREESBORO) Several members of Murfreesboro Fire and Rescue along with Rutherford County Fire and Rescue deployed Wednesday (9/12/2018) to assist in hurricane recovery efforts in South Carolina.

They gathered and packed up and rolled out from the old Murfreesboro Police headquarters on South Church around 10am.

Murfreesboro Fire and Rescue Chief Mark Foulks says they're excited to have the opportunity to help in storm recovery:

Rutherford County Fire and Rescue Chief Larry Farley says the local emergency personnel making the trip are well equipped and trained to handle anything they might have to handle:

A total of eight Tennessee teams will be at Camp McCrady Training Center near Columbia, South Carolina, where they will stage until orders are received.

Check out WGNSRadio.com for photos and interviews from various officials.

Below are interviews with those leaving to help:

"Tennesseans have a volunteer spirit to step up and help our neighboring states in times of need and I thank the men and women from these various teams who will be on the ground in the Carolinas when the storm hits to immediately provide needed services and relief," Tennessee Gov. Bill Haslam said. "I also commend TEMA for coordinating the resources while monitoring Hurricane Florence's possible impact to Tennessee."

Tennessee's Hurricane Florence swift-water rescue team has a total of 103 members, coming from each region of the state, with representatives from the following agencies and departments:

"Tennessee is sending well-trained and dedicated emergency managers, first responders, and health professionals to help South Carolinians through what could be a devastating disaster," said Director Patrick Sheehan of the Tennessee Emergency Management Agency (TEMA). "We are all One Emergency Management when any of us provide assistance in an emergency situation. It doesn't matter that we're federal, state, or local responders. What matters is we are there to help when help is needed."