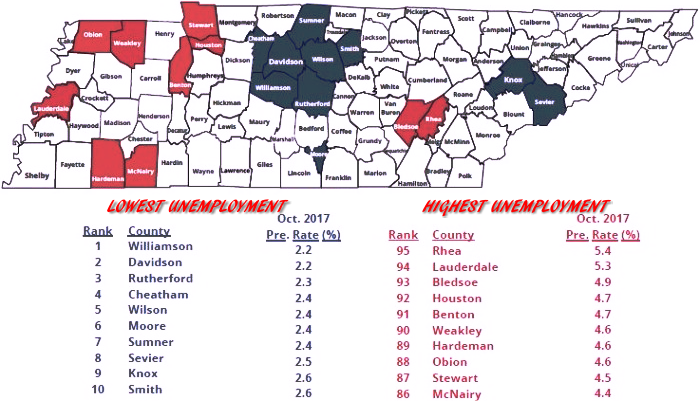 Nearly all Tennessee counties continued to have unemployment rates below 5.0 percent in October 2017, following a record-breaking September when, for the first time ever, each of the state's 95 counties experienced a rate below 5.0 percent.

"To have so many counties under 5.0 percent unemployment, as we head into the holiday season, is a good thing," said Tennessee Department of Labor and Workforce Development Commissioner Burns Phillips. "It means more Tennesseans are able to provide for their families and that is the goal of Governor Haslam's workforce initiatives."

While two counties saw an increase above the 5.0 percent threshold, their rates are still below 5.5 percent. Rhea County has the state's highest unemployment at 5.4 percent, up from 4.9 percent in September. Lauderdale County's rate increased to 5.3 percent, from 4.6 percent the previous month.

The statewide unemployment rate is seasonally adjusted, while the county rates are not. Seasonal adjustment is a statistical technique that eliminates the influences of weather, holidays, the opening and closing of schools and other recurring seasonal events from an economic time series.

Additional information about the Tennessee's labor statistics can be found at Jobs4TN.gov.