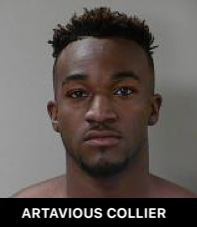 The Riverdale student who was charged with possessing a handgun on school grounds earlier this month now finds himself in more trouble after another incident.

Eighteen-year old Artavious Collier was arrested by Murfreesboro Police Monday after they responded to a shots fired call on Pepperdine Drive, near Oxford Hall Avenue. Officer Austin Ernst reports being flagged down by a witness around 2:30, who gave him four shell casings that the witness reportedly found outside his home after hearing the gun fire.

Ernst then made contact with one of the victims, who said an altercation occurred earlier at the residence. She reported Collier came to her front porch and stated he wanted to fight one of her sons in reference to an earlier argument that happened at Riverdale High School. The victim reported to the officer she asked him to leave multiple times, but he allegedly displayed a hand gun and threatened to shoot her and her sons. That's when Collier left the home.

Just after 7:30 Monday, authorities responded to the intersection of Ransom and Bartway Drive, where a black male fitting Collier's description was sitting in a vehicle holding a gun to his head. Officer Michael Rickard was able to talk Collier into dropping the firearm and he was taken into custody.

After being taken to St. Thomas Rutherford Hospital for evaluation, Collier was taken to the Rutherford County Adult Detention Center and booked on multiple warrants from the earlier incident.

During a search of the vehicle, a black Glock 40 caliber handgun and multiple rounds of ammunition were recovered. A subsequent stolen gun check revealed the handgun in question returned as stolen from Shelbyville.

The 18-year old Pepperdine Drive man is the same one who, on March 2nd, was charged with having a gun on the Riverdale High School grounds. He was expelled and removed from the school immediately after the alleged incident. A loaded 9mm handgun was found in the parking lot that day. The gun was discovered by Rutherford County Sheriff's S-R-O's, who were responding to a tip. Collier was a senior at the school and competed on the football team.

The Monday incident is being further investigated by Murfreesboro Police detectives. Collier is currently facing charges of aggravated assault and possession of a firearm in the commission of a felony. Bond was set at 54-thousand dollars.