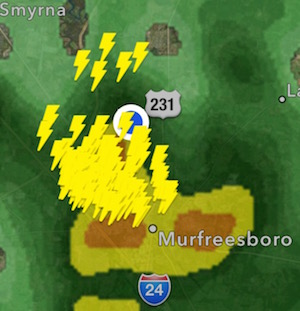 Radar photo of storms with lightning surrounding Murfreesboro around 9pm.

Around 9:45pm the Imperial Inn on Northwest Broad was evacuated due to much of the roof being blown off from high winds. The city dispatched Rover buses around 10:30 to move guests from the motel to other secure locations and the Red Cross was contacted.

Middle Tennessee Boulevard from Mercury to Bradyville was closed for a time due to high water around 9pm. Murfreesboro Police was out redirecting traffic away from the impassable area. There were reports of almost a foot of water on Middle Tennessee Boulevard at Greenland drive. Portions of Old Fort Parkway were also shut down due to flooding. Some areas of the county received over three-inches of rainfall in just a couple of hours.

Dime to quarter sized hail reports were scattered over the county, one from near the Murfreesboro Airport on Northwest Broad.

Lightning not only lit up the sky but also is believed to have struck a home on Vintage Way in Murfreesboro.

The storm also caused scattered power outages across the county, for both Murfreesboro Electric and Middle Tennessee Electric customers. NewsRadio WGNS was actually knocked off the air for nearly two-hours due to a tree downing power lines to the transmitter. Crews worked in the stormy weather to quickly restore power to the radio station.