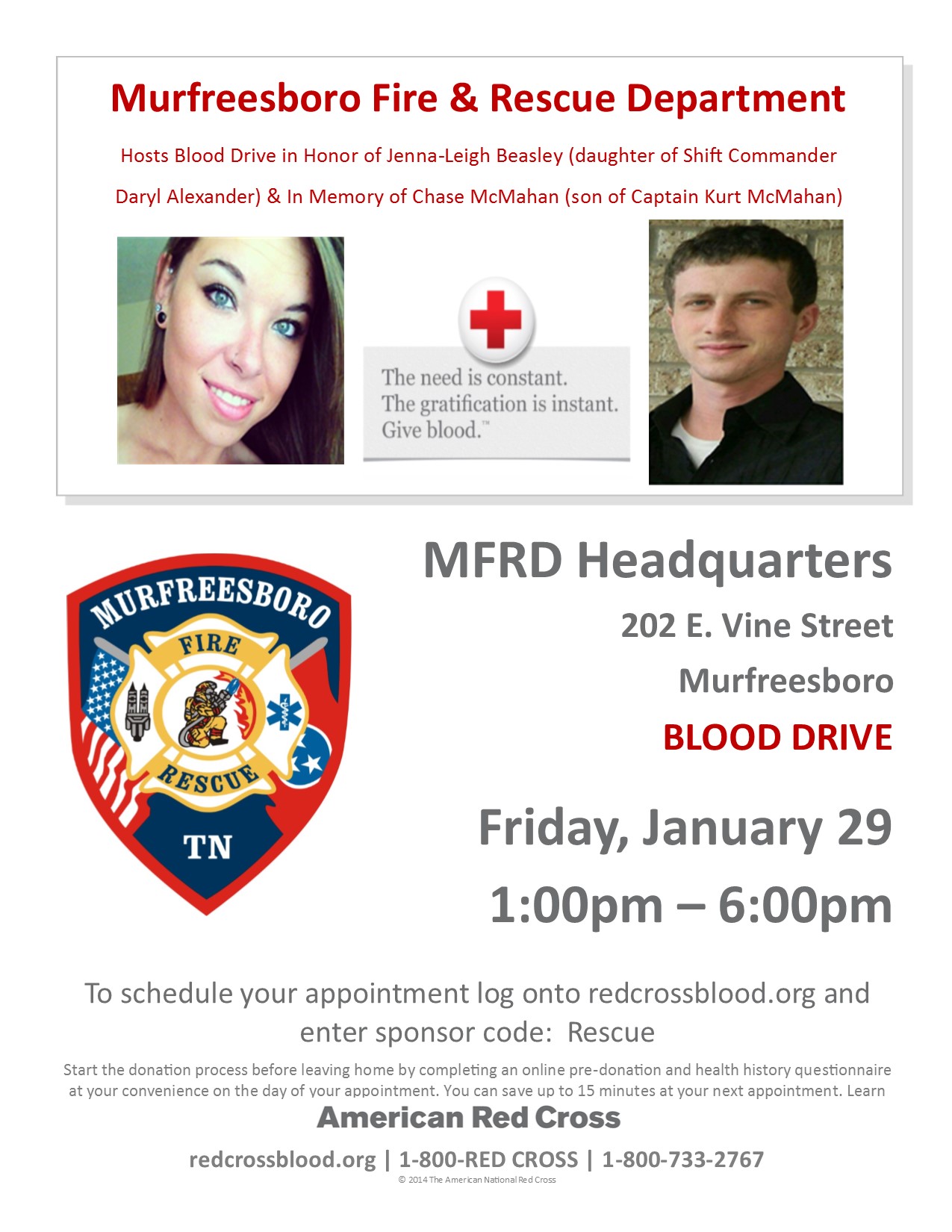 Severe winter weather since Jan. 1 has forced the cancellation of more than 300 blood drives, resulting in more than 9,500 donations uncollected, further depleting an already low winter supply. Right now, blood products are being distributed to hospitals as quickly as donations come in. The American Red Cross has an emergency need for eligible blood and platelet donors to give now to help save patients lives.

These days, it's extremely rare to talk to someone who has not been affected by cancer in one way or another. Murfreesboro Fire & Rescue Department employees and their family members have certainly had their fair share of experience with the disease.

Most recently, the son of a MFRD Captain lost his battle, while a shift commander's daughter, just began hers. This sparked MFRD to want to help on a grander scale.

When, Where, and How?

The drive, hosted in memory of Chase McMahan and in honor of Jenna-Leigh Beasley, will be Friday, January 29 at MFRD Headquarters located at 202 East Vine Street from 1:00-6:00 pm. Anyone interested in giving blood can visit redcrossblood.org and enter sponsor code "Rescue" to schedule an appointment. You must be at least 17 years old, weigh more than 110 pounds, and be in good general health to donate.

Who are Chase and Jenna-Leigh?

Chase McMahan, son of Captain Kurt McMahan was only 24 when he passed away last October. At 17, he was diagnosed with Non-Hodgkin's Lymphoma. After receiving treatment he went into remission until the age of 21, when he was diagnosed with Acute Lymphoblastic Leukemia (ALL). He completed a series of treatments and four months later, was in remission. He continued outpatient treatments periodically for a year, and exactly one year to the day, his cancer returned. Chase fought the fight again, taking a new experimental drug and again, went into remission for four months. Once more, he relapsed, and he and his family were advised by his doctors at Vanderbilt that no further medical attempts would be successful.

"People hear so much about chemotherapy and the variety of other treatments used when our loved ones battle cancer," said MFRD Captain Kurt McMahan. "What is sometimes overlooked are the numerous blood transfusions that patients require to balance the effects their bodies receive from these treatments." McMahan says during the last six months of Chase's life, he received at least 30 transfusions.

Jenna-Leigh Beasley, daughter of Shift Commander Daryl Alexander, was diagnosed in September 2015 with Myelodysplastic Syndrome (MDS). At just 27, she found herself in desperate need of a bone marrow transplant. MFRD and several other public safety agencies hosted bone marrow drives. Over 1,000 people were added to the national registry, eager to be a match for Jenna-Leigh. Unfortunately, with the requirement of a 9/10 matching system, there has been no successful match to date.

"MDS can be a deadly cancer; blood levels can drop to dangerous levels which can require quick blood and/or platelet transfusions," said her mother, Karen. "Low blood levels have caused Jenna-Leigh to have extreme headaches, tiredness, and the inability to fight infection or to simply stop bleeding from an injury. She has received multiple transfusions already and without the generosity of strangers donating blood, I don't know what we would have done." Jenna-Leigh is now waiting to hear from her doctor to begin the evaluation process for receiving a stem cell/cord blood transplant.

As for McMahan, he says that his son may have lost the battle, but that fuels him even more to help others going through the same thing. "Chase was a fighter throughout his entire journey, and I'm happy to continue the fight for others in his name."

For more information about donating, please visit redcross.org or contact MFRD's Fire Administration Office Monday-Friday 8:00 am to 4:30 pm at 615-893-1422.