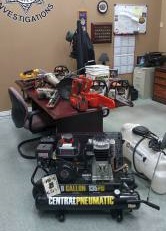 A man was taken into custody Friday in connection with two separate thefts that occurred at a Bedford County construction site.

Investigators with the Bedford County Sheriff's Office arrested David Wilson, 34, of Shelbyville, for the thefts from the site on Sims Road in March.

Several thousand dollars worth of stolen equipment were recovered during the investigation.