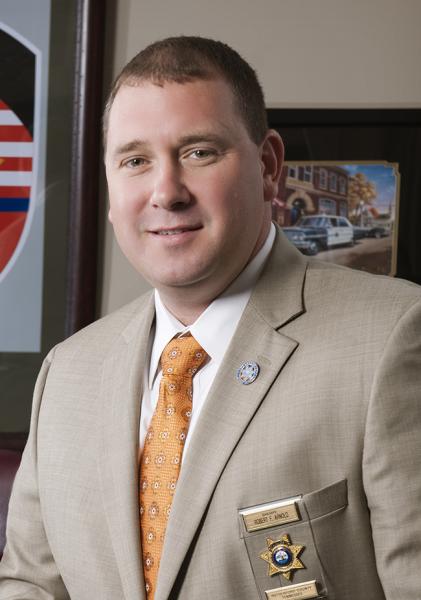 Rutherford County Sheriff Robert Arnold announced today he will seek re-election during the May 6 Republican Party Primary.
“I sincerely thank the voters of Rutherford County for giving me the privilege to serve as your sheriff for the past four years,” Sheriff Arnold said. “As sheriff, I have strived to provide the best trained Sheriff’s Office whose employees are dedicated to serving citizens in every way from the School Resource Officers keeping children safe at school to deputies answering calls to detectives investigating crimes.
“My wife, Megan, and I have two children, and I want to keep this county as safe as possible for my family and every family,” said Sheriff Arnold. “We strive to be the most efficient Sheriff’s Office in Tennessee while spending the taxpayers’ money in a responsible manner.”
Since being elected in August 2010, Sheriff Arnold has improved the Sheriff’s Office by reducing spending while initiating several innovative programs designed to provide enhanced law enforcement and better community relations.
State Rep. Rick Womick said Sheriff Arnold has been “an exceptional steward of taxpayers’ money.
“Sheriff Arnold has saved Rutherford County millions of dollars,” Rep. Womick said. “He’s served Rutherford County well. His dedication and commitment to Rutherford County citizens is second to none.”
One of his greatest accomplishments has been operating the Sheriff’s Office in tough financial times without compromising safety and service to citizens. As a result of conservative fiscal management, Sheriff Arnold returned $1.8 million to the county general budget from unused portions of the Sheriff’s Office operating budget.
Sheriff Arnold saved taxpayers about $1 million by obtaining a donation of used equipment, computers and furniture from the old Middle Tennessee Medical Center for use at the Sheriff’s Office.
In the Adult Detention Center, Sheriff Arnold slashed inmate food costs by $110,000 annually by eliminating condiments, coffee and orange juice and generated $276,000 from bail bond fees, phone fees by inmates, recycling and video visitation.
Sheriff Arnold developed the inmate-run Garden of Hope, partnering with MTSU’s Agribusiness Department to teach inmates how to grow their own food. Produce is served to inmates. The garden is funded by donations and proceeds from recycling.
Sheriff Arnold implemented community-based programs such as the Senior Citizens Awareness Network where volunteers visit senior citizens to ensure they have sufficient food and a safe place to live.
Creation of the Criminal Intelligence and Analysis Unit was cited as another accomplishment. This program marks trends in county crime and prepares crime maps in an effort to reduce criminal activity. This unit has become central to the Sheriff’s Office’s efforts to make Rutherford County safer. The sheriff created the Active Crime Enforcement Unit, which concentrates more personnel resources in high-crime areas.
The Sheriff’s Office launched the Offender Watch Web site at http://www.sheriffalerts.com/cap_main.php?office=55531 that allows citizens to identify registered sex offenders and where they live. In this way, parents and neighbors will know if a sex offender lives in their area. Also, the Sheriff’s Office launched the Mobile App where citizens can use a free phone app to learn who has been arrested each day.
Sheriff Arnold joined the Sheriff's Office in 1999 as a correctional officer, then he was promoted to a patrol deputy and eventually a School Resource Officer.
He graduated from the National Sheriff's Institute, Sam Houston State University's Correctional Management Large Jail Operations, various law enforcement leadership courses from the University of Tennessee and the University of Louisville and Leadership Rutherford.
“Serving Rutherford County is an honor and I look forward to continuing our reforms and improvements,” Sheriff Arnold said. “I depend on our dedicated team of employees. They are motivated and focused on reforming every aspect of the Sheriff’s Office to provide the best Sheriff’s Office possible.”
Sheriff Arnold is supported by former Rutherford County Republican party chairmen Howard Wall, Austin Maxwell, Rick Womick, D.C. “Jim” Daniel, Ransom Jones and Jimmy Evans, Lou Ann Zelenik. He received endorsements from State Rep. Joe Carr (R-48), State Rep. Mike Sparks (R-49), State Rep. Dawn White (R-37), State Rep. Rick Womick (R-34), State Sen. Bill Ketron (S-13) and State Sen. Jim Tracy (S-14).
“I will continue to serve Rutherford County citizens with energy and enthusiasm and with safety as my No. 1 priority,” Sheriff Arnold said.
Read more from:
News
Tags:
Murfreesboro news, Robert Arnold, Rutherford County Sheriff, Sheriff Arnold
Share: