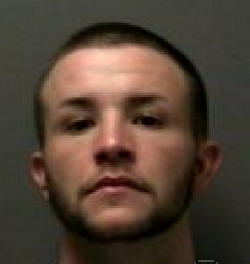 A Shoshone Place man faces a laundry list of charges after a Saturday domestic situation. The victim called Murfreesboro Police after she suspected the accused, Brandon Lee Rowlette, age 28, was inside her home. His car was parked in her driveway. Police searched the location and discovered him hiding inside a utility closet after being forced to pry it open. Among the items taken from him were a straw with residue and a 380-caliber Ruger handgun, with five-rounds of ammo. One was in the chamber. After checking the gun registration, it came back stolen from a Friday burglary just a few houses down. Other items found in Rowlette's vehicle also belonged to the burglary victim, according to M-P-D reports. Rowlette faces two counts of aggravated burglary, vandalism and theft, a bond violation, possession of drug paraphernalia and possession of a handgun by a felon. He'll appear in court on December 11th and was jailed with no bond in the Rutherford County Adult Detention Center.

Later that evening, Murfreesboro Police were called back to the Shoshone Place home where two women reportedly tried to take televisions. Tabitha Ridge, age 30 and Brandy Ridge, age 27, of Flemming Farms Road, told police Rowlette called them from jail and asked them to take the televisions. The report says the front door of the residence had been kicked in. Items were placed against the door to keep it shut and they left through the back. The televisions were recovered and given back to Rowlette's girlfriend. Tabitha Ridge and Brandy Ridge were both charged with aggravated burglary, theft and vandalism charges. They'll be in court January 27th after being place in jail on 75-hundred dollars bond.