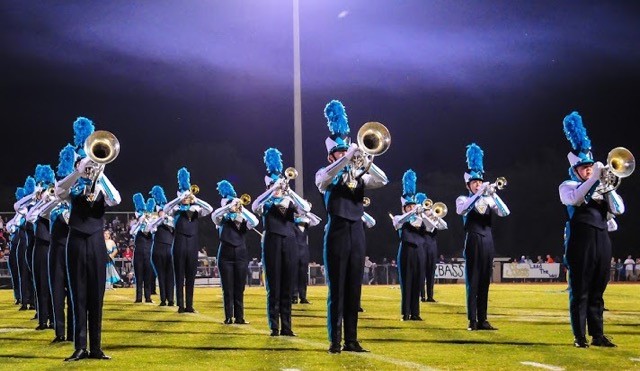 After breakfast, you can stay and bid to win one of over 200 unique items offered in the Silent Auction! Included in the auction are, a portrait session from Shacklett's Photography, a Mapex Drum set, tickets to several Tennessee amusement parks, the Nashville Symphony, UT football, many local restaurant & retailer gift cards, sports collectibles, fine gifts and jewelry, and much, much more! The Silent Auction will end promptly at 10:35am. After the auction, the band will perform portions of their 2016 competition show entitled 1001 Nights - The Stories of Scheherazade for us! It's Siegel's traditional start to the marching band season, and we would love everyone to join us!

This is the annual fundraiser for the award winning Murfreesboro band, under the direction of Alex White & Alex Sears. Siegel High School is beginning its fourteenth year of existence, and the Siegel Marching Band is proud to have been an award-winning band each and every year. The band is the Columbia Invitational Overall Grand Champion, the 2014 Admirals Cup Invitational Overall Grand Champion, and has been the Contest of Champions Grand Champion in 2009, 2010 & 2011 as well as finishing in 3rd place in 2014 and 2015. Siegel performed at the University of Tennessee Band Day event on September 28, 2013, the only band ever invited from the middle Tennessee region for this honor. Funds earned from this event are used to defray the costs to purchase music, instruments and color guard equipment as well as assist with travel costs to contests and the many other expenses throughout the fall season.

Another great upcoming fundraising event for the band is coming up on Saturday, September 3rd in the Siegel High School cafeteria. The Siegel Band will host a Mattress Sale in the school cafeteria from 10 a.m. to 5 p.m. Just some of the great brands available at up to 50% off retail prices are Beautyrest, Simmons, Malouf, Restonic, Therapedic and more. A portion of the sales will benefit the Siegel High School Band.

The band is also offering corporate sponsorship opportunities, starting at $50 that will expose your business to both our band family and those attending our award winning performances at various competitions all over the State of Tennessee. In addition, there are even greater opportunities to advertise with our 2nd annual Stones River Championship Band Contest, to be held on October 1, 2016 at Siegel H.S. Over 2000 people are expected to attend this one day event! If you are interested in being a sponsor, please contact us through our website at www.siegelband.org or info@siegelband.org. The Siegel High School Band Boosters are a 501(c) (3) charitable organization. All donations to the organization are tax deductible.