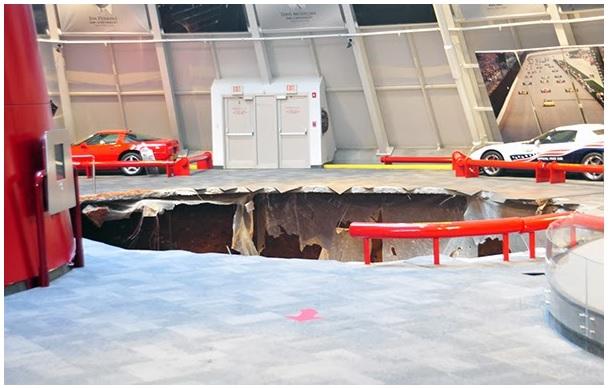 WGNS News learned that at 5:44 Wednesday morning, officials with the Corvette Museum received a call from their security company alerting them that the motion detectors were going off in our Skydome area of the Museum.

In a written statement from Marketing and Communications Manager Katie Frassinelli, "Upon arrival it was discovered that a sinkhole had collapsed within the Museum.  No one was in or around the Museum at the time. 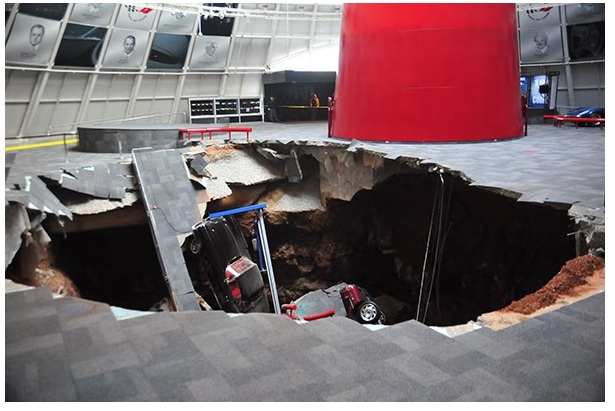 The Bowling Green Fire Department arrived on the scene and secured the area.

She noted, "It is with heavy hearts that we report that eight Corvettes were affected by this incident. None of the cars affected were on loan from individuals.  We have contacted a structural engineer who is arriving today to assess the existing damage and stability of the surrounding areas.  While the Skydome area is closed, the remainder of the Museum is still open."

If you're trying to picture the Skydome, it is the most visible part of the museum from the outside. Inside the museum, this is the area where some of the rare Corvettes are placed for public viewing. It appears that none of the vehicles owned by private individuals that were displayed in the Skydome were affected.

The other six vehicles were owned by the National Corvette Museum including:

This year we celebrate our 20th Anniversary and look forward to re-opening the Skydome exhibit area very soon. The museum is in Bowling Green, Kentucky, which is only 95 miles from Murfreesboro. It is located just off interstate 65, and across the street from the Corvette factory, where General Motors assembles the sports cars.

Like Murfreesboro, Bowling Green is in a karst area, in fact it is Kentucky's largest cave area. The limestone geography creates numerous underground streams and caverns. Many of those are said to link with a major tourist attraction in the area: Mammouth Cave. Speleologists have also thought there might be a connection of the series of caverns in this part of Middle Tennessee with Mammouth Cave as well.

A "live" cam in the Corvette Museum usually shows cyber visitors some of the exhibits. Today you see firefighters at the scene.