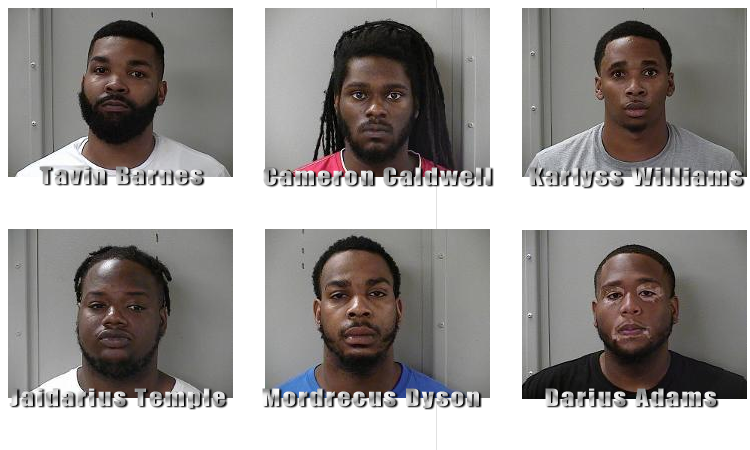 A total of six people were arrested at The Point at Raiders Crossing apartments by the Murfreesboro Police Gang and Special Operations Unit. Authorities made the arrests when they executed a search warrant at 2315 North Tennessee Boulevard, apartment 714 earlier this month (July 5, 2018).

The warrant was issued based on narcotics allegedly being sold from inside the apartment and possible gang activity.

When police entered the apartment they first made contact with "Tavin Barnes" who was said to have a felony amount of marijuana along with a loaded 40 caliber handgun hidden in a nearby couch. The 28-year-old Cordova, Tennessee resident was charged with Felony Possession of a Schedule 6 Drug, Possession of a Firearm in the Commission of a Felony and Possession of Drug Paraphernalia.

The report went on to state that 24-year-old Karlyss Williams was in the kitchen next to a cabinet containing another felony amount of marijuana and a loaded 9mm gun. Williams, who said he lives in Memphis, Tennessee, was charged with Felony Possession of a Schedule 6 Drug, Possession of a Firearm in the Commission of a Felony and Possession of Drug Paraphernalia.

As officers made their way to the apartment bedroom, they located Jaidarius Temple. The 23 year old Memphis resident had warrants for his arrest from both Nashville and Rutherford County.

In another bedroom, Gang Unit Members captured Mordrecus Dyson from Murfreesboro and Darius Adams from Memphis. Police found another felony amount of weed along with a handgun that had been reported as "Stolen" in Memphis, Tennessee. The gun, that was stolen in December of 2017, was quickly seized by officers. A second gun was then found in a bathroom. Both Dyson and Adams were charged with Felony Possession of a Schedule 6 Drug, Possession of a Firearm in the Commission of a Felony, Theft and Possession of Drug Paraphernalia.

The official arrest report showed that all six subjects denied ownership of the drugs and firearms found in the apartment. The six are scheduled to be in court on October 10, 2018.