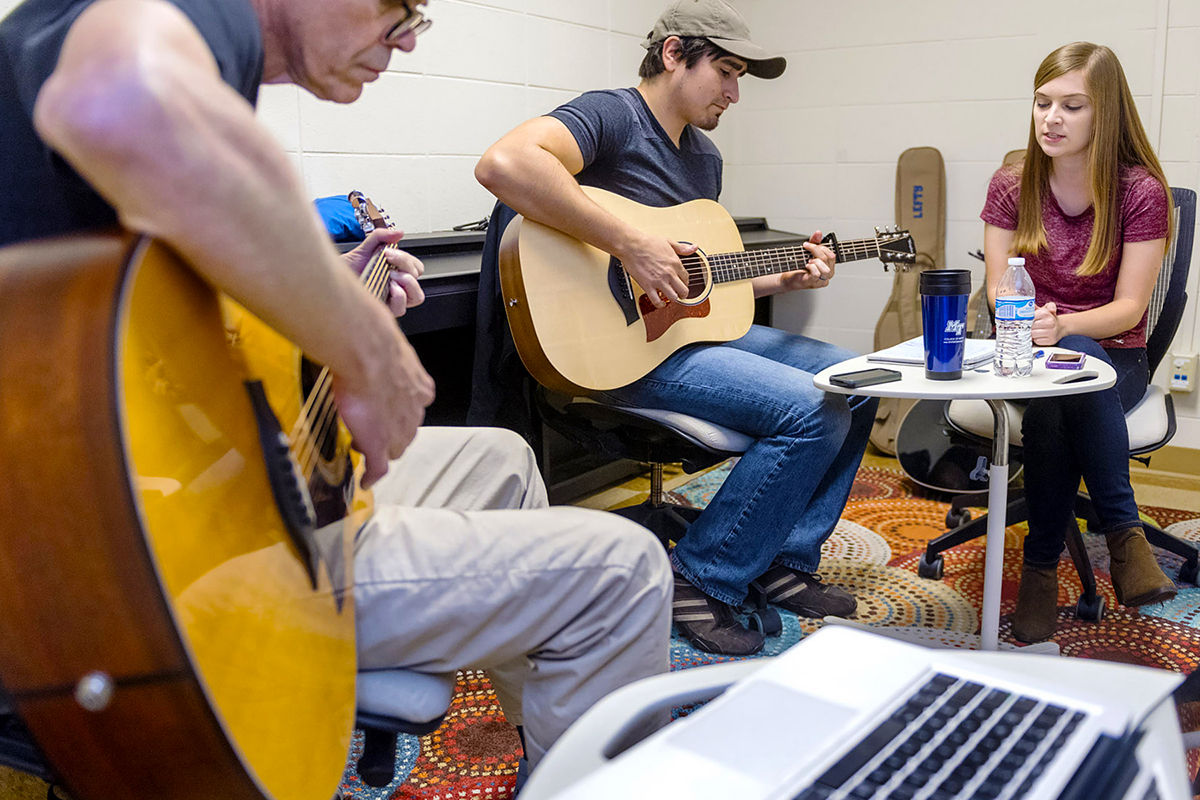 The day could've been another workday for seven Nashville songwriters and another co-writing assignment in an MTSU experiential learning course for seven advanced commercial songwriting students.

By teaming up with seven Midstate veterans, Oct. 28 instead became an opportunity for healing. The daylong "Operation Song" songwriting session at MTSU culminated in new friendships, seven unique songs and a mini-concert filled with cheers, tears and standing ovations.

"This was the first time I got a chance to speak to someone who truly listened to me, not trying to 'fix' me or trying to know what's wrong," said U.S. Marine Corps veteran Juan Davila of Antioch, Tennessee, a senior computer science major at MTSU.

Operation Song, established in 2012 by Nashville songwriters, helps retired and active-duty veterans and their families sort out their experiences and emotions by sitting down and telling their stories, which are then turned into song.

The Nashville Songwriters Hall of Fame, which works with Operation Song, reached out to Odie Blackmon, director of MTSU's Commercial Songwriting Program in the Department of Recording Industry, this fall about a possible event with the university. MTSU's Charlie and Hazel Daniels Veterans and Military Family Center invited local veterans.

The MTSU "Operation Song" results ranged from "My Mission is You," a vow of gratitude by retired U.S. Air Force Chief Master Sgt. Darryl Leach, an information technology specialist for the recording industry department, to "Things I Can't Take Back," a somber remembrance of a lost U.S. Army 101st Airborne Division comrade from Capt. Shane Smith of MTSU's Department of Military Science.

Nick Ferzacca, a senior audio production major who lives in Murfreesboro, offered "Ain't Dead Yet," an anthem culled from his years as a master gunner with the Army's 1st Cavalry Division. Blake Pickel, another Antioch resident and 101st veteran, explained in "Screaming Eagle" how his "life changed in the blink of an eye" during Operation Dragon Strike in Afghanistan.

U.S. Army veteran and musician Ian Wagner of Goodlettsville, Tennessee, performs often with Operation Song but never wrote with the volunteers before his MTSU visit.

Admitting that he's one of the few "to be pinned with a Purple Heart at Arlington (National Cemetery) and walk away," Wagner, who served with the 10th Mountain Division in Afghanistan and Iraq, crafted "Broken Purple Heart" to honor those beneath the hallowed ground.

He worked with senior Laura Short of Atlanta and Marc Beeson, co-writer of Blake Shelton's recent single "She's Got a Way with Words," in an Ezell Hall writing room.

"What an amazing experience this has been," Beeson said. "At the end of the day, the only one I need to know is happy is the soldier. It's his story, his truth. We're just two more instruments in the room."

U.S. Navy Seabees veteran Kevin Quarles of La Vergne, Tennessee, a senior music business major, turned his disorientation on resuming civilian life into "Get Back to Yourself" during his day with senior Lauren Wilson of Bremen, Georgia, and Nashville songwriter George Teren, co-writer of Tim McGraw's "Real Good Man."

Blackmon said the "different components in this project, including service learning, are awesome for my students. Not only are they learning from Hall of Fame songwriters, they're learning something about people who gave so much to all of us. I'm glad that they (Operation Song) wanted us to be a part of it."

Students in MTSU's Master of Fine Arts in Recording Arts and Technologies recorded the performances at day's end in the Bragg Media and Entertainment Building's Studio A for CDs for each of the veterans.

"People kept bringing me these CDs that Operation Song produces and saying, 'You need to do this!'" said Hilary Miller, director of the Daniels Center. "This is such an act of courage by our veterans."

"I am thoroughly impressed," Regan said. "Is this worth doing again at some point down the road? Well, spread the word and we'll make it happen!"

For details on MTSU's Commercial Songwriting Program in the College of Media and Entertainment, visit http://www.mtsu.edu/programs/commercial-songwriting.