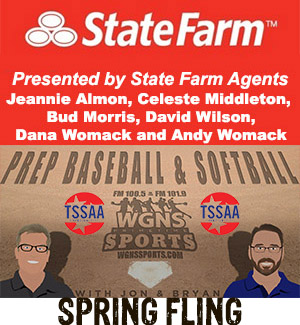 Blackman took an early 3-nothing lead in the top of the first and never trailed in the game in an 11-to-3 win over Kingsport Dobyns-Bennett.

In the game, heard "LIVE" on NewsRadio WGNS, the Blaze would add six runs in a fourth inning that saw 12 batters come to the plate.

Jacob Jones earned the win for Blackman, tossing five innings and giving up only one run on three hits and two strike outs. Justin Etling and Justin Scheitel pitched an inning each in relief.

Blackman right fielder Michael Chuba was 4-for-5 at the plate with a run scored and five RBI.

The Blaze will battle Brentwood at 12:30pm (weather permitting) at Siegel Wednesday.

Maddox Vondohlen didn't allow a single run as Stewarts Creek defeated Houston 10-0 in 5-innings. He didn't give up a run on only two hits, struck out five and issued no walks in the win.

The Red Hawks had ten hits in the game. Tre Bailliez and Austin Steel each managed two hits to lead Stewarts Creek.

It was a pitchers duel in the Central Magnet - Pigeon Forge game. Scoreless to the top of the seventh, the Tiger's Parker Phillips hit a solo homer off of Pigeon Forge pitcher Brock Browning for the only score of the game.

The Tigers will play Covington at 12:30pm (weather permitting) at Smyrna Wednesday.