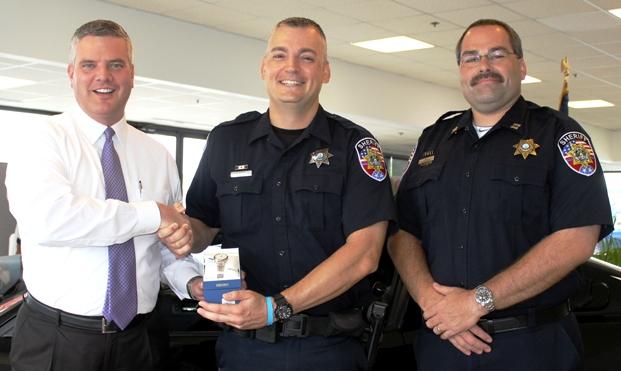 Saving the life of a 7-year-old choking girl earned Officer of the Month honors for April for School Resource Officer Matt Powell. For his efforts, SRO Powell received an engraved watch from owner David Lee of Ford of Murfreesboro.

SRO Powell was visiting with a second-grade class eating lunch when a girl choked on her food. She stood up and attempted to drink water. She dropped her cup, grabbed her throat and jumped up and down in panic.

“Immediately, I grabbed her with my right hand and began to firmly smack her back with my open left hand,” SRO Powell said. “After striking her several times, the food became dislodged and her airway was restored. She sat back down and began to cry as her normal color returned.”

SRO Powell comforted the girl until a cafeteria employee brought her more water. He encouraged her to drink a few sips before taking her to the school nurse.

Lee said, “Ford of Murfreesboro would like to honor SRO Powell for his actions to save a choking young girl. Actions like these should never go unnoticed and we commend SRO Powell for both his heroics and training skills. He did a great job.”

Sheriff Robert Arnold said SRO Powell was certainly in the right place at the right time.

“SRO Powell acted quickly to do the thrusts on the student’s back to dislodge the food,” Sheriff Arnold said. “We commend SRO Powell for saving this young girl’s life.”