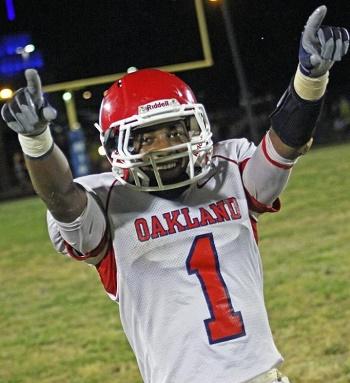 Oakland scored 21 unanswered points after the game was tied at 14 with about seven minutes left in the third to beat host Smyrna 35-14. The Patriots scored the go-ahead touchdown with 5:33 left in the third quarter on a 40-yard bomb from JaCorey Smith to Kyle Oliver...

Oliver caught two touchdown passes in the game and Smith threw another to Jacoby Stevens. Josh Cunningham and Tyler Black both ran for scores as Oakland improved to 4-and-1 in the win. Black had 95-yards rushing in the second half and 105 for the game on 18 carries. Smyrna's Ikenna (EYE-ken-ah) Okeke (OH-kay-kay) had both of the Bulldog's scores. One on a nine yard pass from quarterback John Turner in the second quarter and another on a pick-six in the third. Smyrna loses their first game of the year, dropping to 4-and-1. Next week, Oakland travels to Brentwood while Smyrna hosts Sycamore.