State of the University and CLASSES BEGIN! 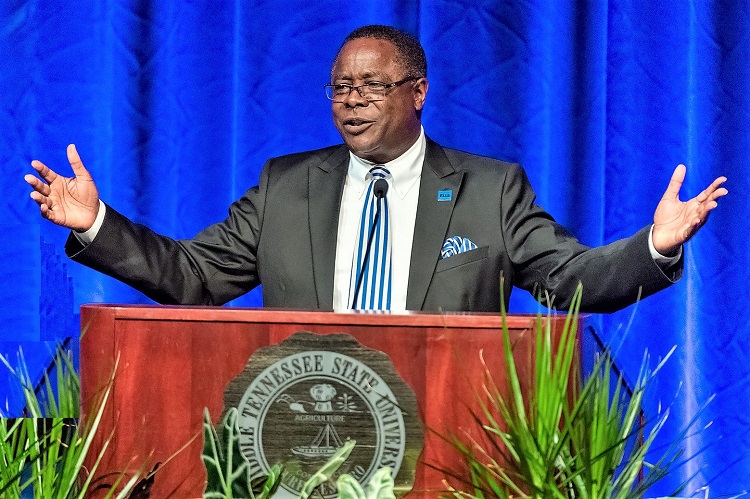 President McPhee applauded the university's faculty and staff for continued progress in student retention and graduation while emphasizing the need to develop new strategies in an ever-evolving higher education landscape.

Now in his 18th year leading the Blue Raider campus, McPhee addressed a capacity crowd of faculty and staff inside Tucker Theatre during his annual State of the University remarks as part of the traditional Fall Faculty Meeting in advance of classes beginning Monday for fall semester.

"The calling to make a difference in the lives of others -- the passion that drew each member of our academic community to fulfill careers in teaching, research, service, and providing mentorship -- is the ultimate goal of our institution," he said.

In assessing the university's overall progress during his hourlong remarks, McPhee noted that MTSU continues making progress through its Quest for Student Success initiative to improve retention and graduation rates, accountability and affordability while "striving to become the public university that more students and parents look to for a top-rate education."

He cited the increase in full-time freshman retention rate from 69 percent in Fall 2013, when the university first began its student success initiatives, to 76.8 percent in Fall 2017. MTSU's efforts have become a national model, he said, with media outlets such as The New York Times, the Washington Post and the Chronicle of Higher Education taking note.

He commended University Provost Mark Byrnes and Vice Provost Rick Sluder for leading the retention efforts and touted a list of other achievements from across the university -- from funded research to accelerated graduate programs and from athletic successes to ongoing support for student veterans.

"Our proven ability to educate graduates with the least amount of taxpayer dollars per-student is something in which we can, and should, take great pride," he said.

McPhee also announced Thursday that the MTSU Board of Trustees earlier this summer approved his recommendation for a 1.5 percent across-the-board salary increase for employees while also approving the use of $3.7 million in state and university funds for partially implementing a compensation plan to make MTSU salaries more competitive over time.

McPhee concluded his remarks by noting that he would be meeting with senior administrators and deans in the coming months to develop strategies for the next five years "that will differentiate MTSU from our peers and competitors."