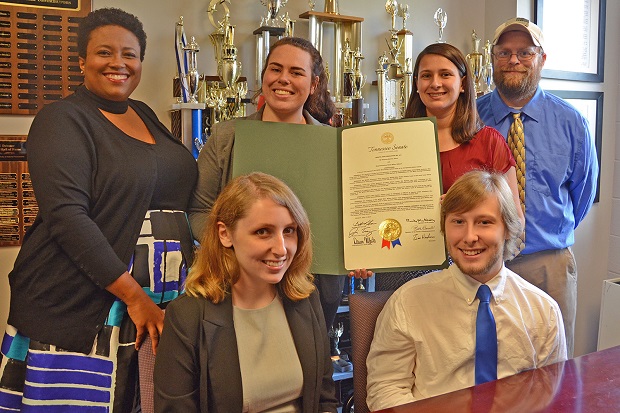 Some of the members of the Blue Raider Debate team are shown inside their office in Jones Hall with the Tennessee Senate Joint Resolution presented to the team earlier this year. Pictured are, seated front row from left, Jordan Nickell, a junior interactive media and sociology major from Jackson, Tenn.; and Alex Fingeroot, a religious studies, political science and history major from Tallahassee, Fla. Back row, from left, are Natonya Listach, assistant coach and instructor in communication studies and organizational communication; Katelyn Brooks, a senior communication studies and anthropology major from Nashville; Skye Irish, a senior political science major from Rockwood, Tenn.; and Pat Richey, debate team coach and director of forensics at MTSU. (MTSU photo by Jimmy Hart)

The resolution was sponsored by state Sens. Bill Ketron of Murfreesboro and Jim Tracy of Shelbyville and Reps. Dawn White of Murfreesboro and Brenda Gilmore of Nashville. It also includes the signatures of Gov. Bill Haslam, Senate Speaker Randy McNally and House Speaker Beth Harwell.

Debate team coach Pat Richey, director of forensics at MTSU, said the resolution "was a great and unexpected honor." Joint Resolution 407 honored the 2016-2017 MTSU Blue Raider Debate team for its second International Public Debate Association national championship and a "phenomenal" season in which the group of 20 or so debaters also won a number of regional titles as well as numerous individual awards.

"The students worked hard and traveled to multiple tournaments throughout the region and competed against some of the best schools in the nation," Richey said. "MTSU Debate prides itself as a walk-on team and all majors are welcome."

Under Richey, the team has grown to include a new Individual Events section that focuses on speaking events and acts under the leadership of assistant team coach Natonya Listasch, an instructor in communication studies and organizational communication.