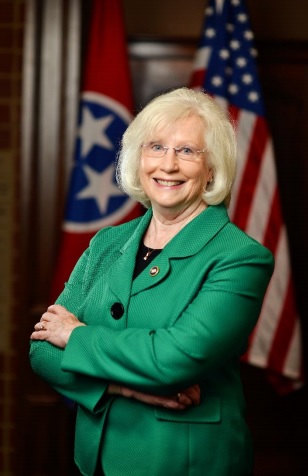 State Senator Mae Beavers (R-Mt. Juliet) intends to formally announce a campaign for Governor of Tennessee at Charlie Daniels Park in Mt. Juliet at 1 pm on Saturday June 3, 2017. Further details for the campaign kickoff will be announced later this week.

"Over the past several weeks, it has become increasingly clear that conservatives in Tennessee are looking for bold leadership that will not shrink from standing up and speaking up on the key issues facing our state," Beavers said in making the announcement of her intentions to run. "President Donald J. Trump is taking the lead in Washington to "drain the swamp" there; but we have our own swamp in Tennessee and I intend to do the same thing in the Volunteer State."

There will be numerous issues that will be discussed and debated during the Governor's race, but Beavers was quick to pinpoint her top priority. "The terrorist threat from radical Islam not only impacts other countries or major cities in our own country -- that threat is also targeted at our communities and our families in Tennessee and I intend to make security a centerpiece of my campaign," Beavers said in announcing her intentions.

"Family values is an issue that Republican candidates often talk about during campaigns but then gets tossed away like leftover campaign signs after the election is over," Beavers pointed out. "As Governor, I will make sure that Tennessee focuses on protecting children before they are born and then providing them a safe and secure environment to grow up in after they are born." That safety and security extends to making sure that men don't go into the bathrooms and locker rooms of little girls, Beavers said.

"I will also devote my effort and attention to insure that Tennessee taxpayers will get the biggest bang possible for their tax dollars, with spending focused on results rather than catering to special interest cronies and big corporate donors," Beavers promised. "And that means a full effort to repeal the gas tax increase that the legislature just passed and Governor Haslam just signed into law." "

I didn't lead the fight against a state income tax and spend the last several decades in public office working against tax increases in order to have a Republican majority legislature impose a tax increase on fuel while we have a $2 billion dollar surplus," Beavers pointed out. "Punishing working men and women in Tennessee with a big increase at the gas pumps when we have other revenue available to build and repair our roads is completely unacceptable and we should make repeal of that tax a priority."

"Over the next year leading to the GOP Primary in August, 2018 I will talk in more detail about other issues that deserve our attention and which will be my focus as Governor," Beavers promised. "But those who have been wanting a clear, consistent conservative to lead the way should join us Saturday to find out how they can help move Tennessee in the right direction!"

Conservative Republican State Senator Mae Beavers represents the 17th Senatorial District and was the Chair of the Tennessee Republican Delegation to the Republican National Convention in Cleveland, Ohio in 2016...the first female to ever chair the Tennessee delegation. She was a Trump delegate to the convention and received the most votes of any candidate running for a statewide GOP delegate position. She and her husband Jerry live in Mt. Juliet.