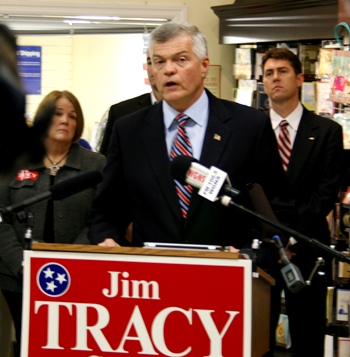 On Wednesday (1/2/2013) morning, State Senator Jim Tracy officially announced that he would be seeking the U.S. Congressional seat currently held by Dr. Scott DesJarlais in the 4th District.

Tracy made the announcement in a packed room at Reeves-Sain Drugstore on Memorial. He explained why the decision was made to run . . .

State Senator Jim Tracy told the standing room only crowd that he feels Congressman DesJarlais has lost his effectiveness, because of all the personal scandals.

Tracy indicated that he decided to make the announcement early to allow time to visit all of the counties in the 4th U.S. Congressional District of Tennessee. "Geographically, that's a big area and I want to have plenty of time to get to know the likes, dislikes and wishes of the people who make-up the area."

Redistricting last fall made Tennessee's 4th U.S. Congressional District, geographically, the largest in the state. It is a swath of counties from Murfreesboro in middle Tennessee to the far eastern portion with Cleveland in Bradly County. The district includes Rutherford, Bedford, Bledsoe, Franklin, Grundy, Lincoln, Marion, Marshall, Meigs, Moore, Rhea, Sequatchie and Warren counties, along with parts of Bradley, Maury and Van Burean counties.

Knows He Has Tough Job Ahead

The local Republican state senator commented that he knew he had a big challenge in front of him, but that he was not trying to do anything underhanded and spoke with the incumbent on New Year's Day . . .

When Murfreesboro Business Leader and Pharmacist Shane Reeves introduced Senator Tracy, he said, "His strength is that he represents constituents with the simplicity of the ABC's. A is that Tracy is always accessible. B represents his strong business sense. C is that he has common sense."

Jim Tracy has served in the State Senate since 2004 and is the chairman of the Senate Transportation and Safety Committee. 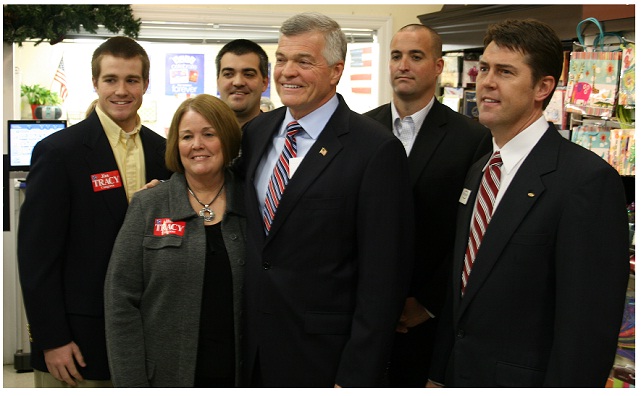 (Above Photo) State Senator Jim Tracy (center) with his wife Trena (left of him) and friend Murfreesboro Pharmacist Shane Reeves (right of him), along with the Tracy's three sons in the background

Jim Tracy is on the board of the Rutherford County YMCA and active with the Chamber of Commerce. He is also on leadership council for the National Federation of Independent Businesses, and local insurance agent in Rutherford and Bedford Counties.

He is a former science teacher and coach and former TSSAA and NCAA basketball referee, has been a small business owner and leader in the community for over 25 years. Tracy has been married to his wife Trena for 36 years and they have three adult sons: Chad, Craig, and Connor. Jim and his wife attend Fairlane Church of Christ where he serves as a deacon.