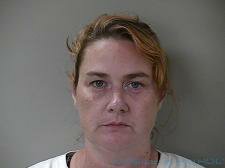 A Chevy pickup truck that was reported stolen in Cannon County was found in Murfreesboro. Police spotted the truck on East State Street around 8:00, Wednesday morning.

When police pulled the truck over they spoke to driver Anita Ann Harden from Woodbury. When police ran a quick warrants check on Harden, it was discovered that the 45 year old woman was wanted on three theft charges in Cannon County. She also had a warrant in Rutherford County for violating her probation.

Prior to police towing the stolen truck to the impound lot to be picked up by the rightful owner, they did an inventory of the trucks contents. Inside, they found a crack pipe. At first, Ms. Harden denied ownership of the pipe, but later stated that she has been smoking crack since Friday, according to the police report.

Harden will be in court to face theft charges in the near future.