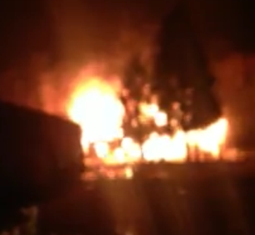 Shortly after 9:00 o'clock Sunday evening (2/2/2014), fire units from Rutherford and Bedford Counties rushed to a structure fire on Newtown Road near the Bedford County line. Approaching units reported that the sky was bright orange. They also noted that the roads were curvy and extremely slick. It was raining and temps were near the freezing mark.

The first responder on the scene described the Rutherford County home as fully involved and that there was a 500-gallon propane tank within 200-feet of the burning structure.

Early reports showed the residents were not at home when the blaze began, but there was concern that the flames were spreading to a nearby barn.

Units were dispatched to the scene at 9:11 Sunday night (2/2/2014), and stayed on the scene until 11:20PM. Bedford County remained at the scene to extinguish "hot spots". The home owners were not at the home at the time of the fire.

The 3,000 square foot home is near where Newtown Road/Fruit Valley Road intersects with Walnut Grove Road. The home was a total loss. It was constructed in 2009 on the approximately three and a half acre site.