Suspect allegedly broke into Murfreesboro home, ate a PopTart and took a shower 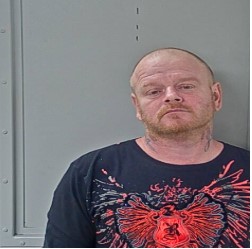 Murfreesboro, Tenn. - A man who made himself at home after breaking into a residence in Murfreesboro six-months ago, has been charged with aggravated burglary, theft and vandalism.

Jimmy Dean Ulrich, Jr., 42, was identified as the burglar after an Automated Fingerprint Identification System (AFIS) hit on a fingerprint recovered from a Pop-Tart wrapper. Ulrich was already in custody at the Rutherford County Adult Detention Center for contempt of court and was served warrants on Feb. 25, for aggravated burglary, theft ($2500 - $10,000), vandalism, and burglary to auto.

The investigation revealed on August 21, 2019, Ulrich entered a Memorial Blvd. home through the attic in the garage, then dropped down through the living room ceiling, causing hundreds of dollars in damage.

Once inside, Ulrich drank a Red Bull Energy drink, ate a Pop-Tart, and took a shower.

Before leaving the home, Ulrich is believed to have stolen firearms, numerous pocket knives, money, an iPhone 7, boxes of ammunition, and other items.

He also broke into the victim's flatbed truck and took a pair of jeans and tools. Ulrich stole the homeowner's KTM 450 Dirt bike and motorcycle helmet as well. He left his shoes on the back patio.

Some of the stolen items were recovered from a duffle bag found on the property, but the firearms and dirt bike are still missing.