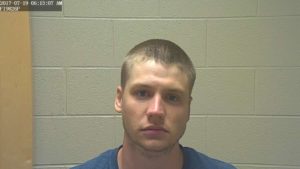 The Tennessee Highway Patrol (THP) Chattanooga District responded to a fatal hit and run crash in Coffee County on Monday, July 17, on U.S. Highway 41. The hit and run vehicle left a mirror at the scene. THP's Critical Incident Response Team (CIRT) identified the mirror as belonging to a 1999-2003 Mitsubishi Galant, champagne in color.

On Tuesday, July 18, at 6:06 p.m. (EST), THP received information from an unknown source advising that the suspect in question was located at 140 Alva Jones Road in Warren County. The source stated the vehicle involved in the Coffee County fatal incident was also at this location. Troopers from the THP Cookeville District were notified of the tip, and were dispatched to the residence to make contact with the driver and secure the vehicle.

The alleged fatal hit and run driver Shelton G. Martin, II age 23 of Smithville was located and taken into custody at 7:01 p.m. (CST) and transported to the Coffee County Sheriff's Office.

The crash took place on Hwy 41 near Hillsboro around 2:30pm Monday afternoon. The crash occurred in the ten thousand block of Highway 41. Arthur J Mantone Jr age 79 of Hillsboro was struck and killed while checking his mailbox. Mantone Jr had parked his vehicle in the driveway of his residence on Highway 41. The man then crossed Hwy 41 to check his mail and he was allegedly struck by vehicle driven by Martin II.