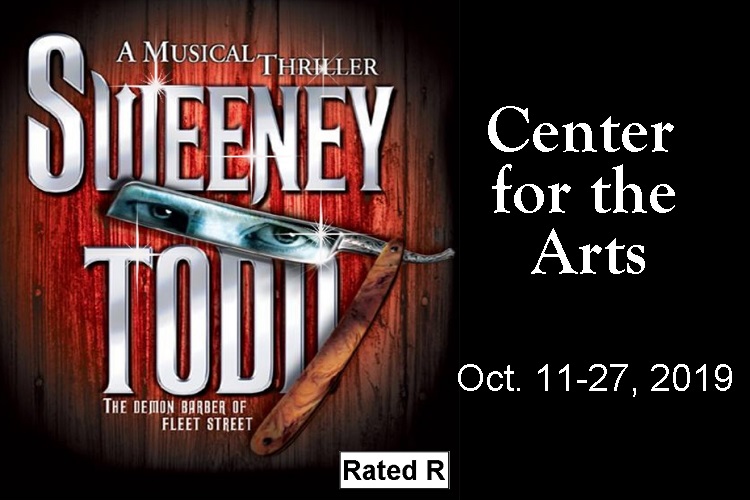 (MURFREESBORO) The Center for the Arts at 110 West College Street opens its production of Stephen Sondheim musical Sweeney Todd at 7:30PM this coming Friday evening. In fact, cast members will be on the WGNS Action Line from 8:10-9:00AM that morning. This play runs October 11-17, 2019.

Sweeney Todd debuted on Broadway in 1979 and was also a 2007 blockbuster film by director Tim Burton. With equal measures of tragedy, horror and dark comedy, Sweeney Todd is not to be missed.

Director Renee Robinson noted, "This musical has always intrigued me and I am so excited to have the opportunity to direct it. The story, while leaning towards macabre and dark, teaches lessons that always seem be applicable, no matter the time period. The cast and crew have been dedicated in telling this story and are doing an amazing job bringing these characters to life."

One of the darkest musicals ever written, Sweeney Todd is the unsettling tale of a Victorian-era barber who returns home to London after fifteen years of forced exile to take revenge on the corrupt Judge Turpin (Ro Coger) who ruined his life. When revenge becomes harder than he had hoped, Sweeney (David Cummings) swears vengeance on the entire human race, murdering as many people as he can, while his business associate Mrs. Lovett (Alexius Frost) bakes mysteriously delicious meat pies and sells them to the unsuspecting public. Sweeney Todd is lush, operatic, and full of beauty.

This production is rated R for graphic violence.

Tickets start at $14 and are currently on sale at boroarts.org, by calling 615-904-ARTS (2787), or at the Center for the Arts Box Office, 110 West College Street, in downtown Murfreesboro.

ABOUT THE CENTER FOR THE ARTS:

The mission of The Center for the Arts is to enhance the quality of life in our community by providing cultural and economic enrichment through the arts.

For more information about the Center for the Arts, phone 615-904-ARTS (2787) or visit their website: www.BoroArts.org.