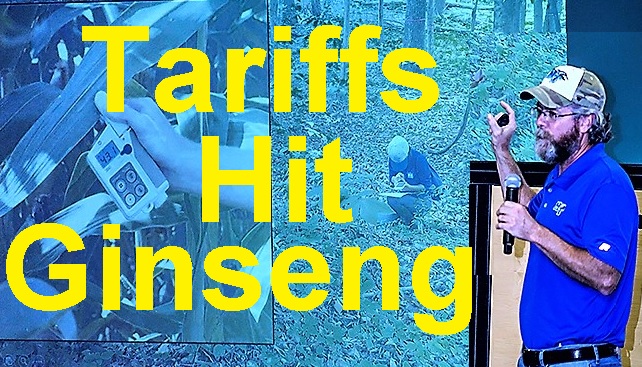 (MURFREESBORO) One of Middle Tennessee State University's newest researchers and institute directors delivered a different perspective -- the political economy and economic impact of tariffs on ginseng growers -- for those attending the Tennessee Ginseng Growers Fall Meeting Friday (8/24/2018) in the Science Building.

Daniel Smith, director of the Political Economy Research Institute at MTSU and associate professor in the Department of Economics and Finance, brought a presentation "analyzing the substantial costs of tariffs to Tennessee ginseng growers and provided a critique of the economic and political justifications used for tariffs" at the conference held in the Science Building.

Ginseng growers, buyers and sellers and others came from all parts of the state for the conference, where they learned about history, export market analysis, preparation for the fall planting season, an added-value ginseng testing certificate and more.

"Trade deficits do not provide an economic justification for tariffs since trade deficits simply reflect the high level of foreign investment in the United States, helping to drive economic prosperity and job-creation," he added.

MTSU alumnus and Murfreesboro resident Tom White (Classes of 1984 and '86), who is semi-retired after a 30-year career as an environmental chemist, took in his second meeting since May because he owns a 7-acre farm near Center Hill Lake in DeKalb County and his family has 50 acres in Monroe County in East Tennessee.

"I know it's suitable for ginseng," said White, referring to the Monroe County tract. "I have an interest to know about harvesting ginseng for income on land that's typically not agricultural because of where it's sloped and wooded. It may be a good activity for me in retirement."

State Rep. Jeremy Faison of Cosby, Tennessee, said he would "like to see us become the greatest state in America (with regard to ginseng). Those people in Tennessee are doing it right."

Ginseng is a very popular over-the-counter supplement that is used to boost the immune system. Currently, the annual world market for ginseng is just over $2 billion, with a starting price of $400 per pound for mature ginseng roots.

Faison added he's "excited to see what MTSU is doing through the leadership of Dr. (Sidney A.) McPhee and Dr. Gao. They're going to make Tennessee be the go-to state for exporting, and I'm excited to help in any way I can."

MTSU alumnus Paul Martin Jr. discussed the university's trip to China in May, where it was announced Guangxi Botanical Garden of Medicinal Plants and MTSU agreed to create a joint ginseng institute to study, develop and promote Tennessee-grown herbal products for sale in Asia and other emerging markets.

Details for the next meeting will be announced on the new webpage, http://www.mtsu.edu/tcbmr/ginseng.php, said Iris Gao, associate professor in the School of Agriculture and researcher with the Tennessee Center for Botanical Medicine Research. Gao organized the meeting.