Tears on Rocky Top as Pat Summitt Passes Away 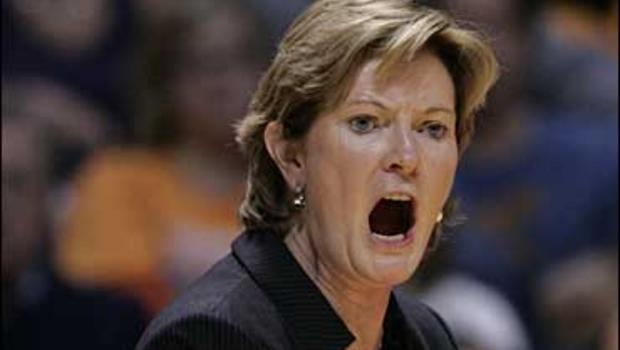 There are tears on Rocky Top, which loses an icon. More from Steve Kathan...

Pat Summitt, the iconic University of Tennessee women's basketball coach who became the winningest coach in college basketball history, has died at the age of 64, several years after being diagnosed with early onset dementia, her foundation's website says.

For 38 years, the trailblazing coach roamed courtside at Tennessee, racking up 1,098 wins against only 208 losses. Along the way, there were eight national championships and 16 conference titles that put Summitt and women's college basketball on the nation's sports map.

She stepped down as Tennessee's coach in 2012, one year after announcing her diagnosis of early onset dementia, Alzheimer's type.

After her diagnosis, Summitt played a leading role in the fight against Alzheimer's. She launched the Pat Summitt Foundation, which is dedicated to researching and educating people about the disease while also providing services to patients and caregivers.

In a 2012 interview with "CBS This Morning," her only child, Tyler Summitt, said that his mother was stepping into a new role at the Pat Summitt Foundation after leaving Tennessee.

"We've always known that God has had a bigger plan for her than just coaching basketball," he said. "And so, she's stepping into a new role where she can still mentor her players and be a role model for them."

The Pat Summitt Alzheimer's Clinic is scheduled to open at the University of Tennessee medical center in December.

"When she fights this disease, what she has taught all of us is how to do it with courage," former Tennessee women's athletic director Joan Cronan said at a 2015 charity event honoring Summitt. "She's done that from Day One. It's been about (how) we can find a cure for this disease, and she has done it facing it straight-on and she's done it giving back as she always has."

Shelley Collier, who played for Summitt from 1983 to 1987, told CBS News in 2012 that when a person thinks of women's basketball, it's impossible not to think of Summitt.

"She has touched a lot of people's lives," she said.

Summit grew up in north-central Tennessee, in a family of five, according to a 2012 ESPN profile. She went to high school in Henrietta, Tennessee, where she played basketball. She later went on to attend University of Tennessee at Martin.

Summitt took over as coach the job of Tennessee Lady Volunteers at the age of 22 in 1974. She has the most career wins of any Division I men's or women's basketball coach.

During her time, Tennessee never failed to reach the NCAA tournament, never received a seed lower than No. 5 and reached 18 Final Fours.

She led the 1984 Olympic team to a gold medal, after having won an Olympic silver medal herself in 1976.

Summitt continued to hold a position as head coach emeritus of the Tennessee women's basketball team up until her death. She attended nearly every home game and many practices in the first year after stepped down as coach, though she had a less visible role in subsequent seasons. She cut back on public appearances in recent years.

Summitt was also an author of three books, her most recent released in 2014, titled "Sum it Up."

Washington Post columnist Sally Jenkins worked with Summitt on all three books. She previously wrote the motivational "Reach for the Summit" and "Raise the Roof," about the Lady Vols' 1997-98 championship.