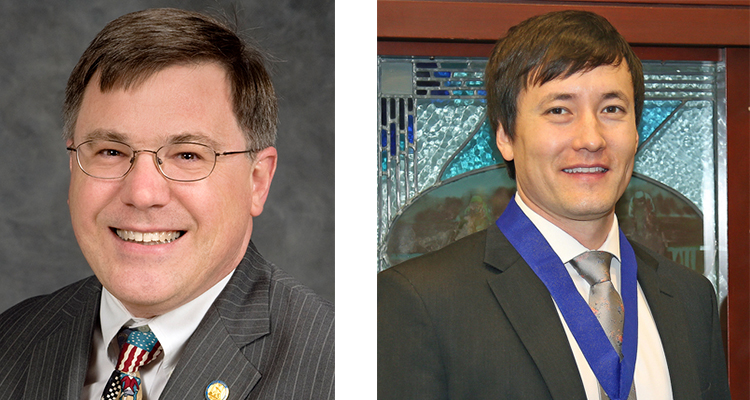 Two members of the MTSU community will be celebrated for their service to their fellow citizens.

John Vile, a Constitutional law scholar and dean of the University Honors College, and Robert L. Owen, a physiology major who is minoring in chemistry, are two of 10 recipients of the 2018 Harold Love Outstanding Community Service Awards. The honors will be presented at 1 p.m. Friday, April 27, in Conference Room D on the eighth floor of the Cordell Hull Legislative Offices Building, 425 5th Ave. N. in Nashville.

Vile received the MTSU Foundation Distinguished Research Award in both 1993 and 1999 and the Career Achievement Award in 2011. A prolific author of scholarly texts, Vile is a scholar of the Founding Fathers and of the process for amending the U.S. Constitution. He is a member of Phi Beta Kappa, Omicron Delta Kappa and Phi Kappa Phi honor societies.

"As a political scientist, I believe that public service is part of good citizenship," Vile said. "There are numerous 'little brigades' that consist of social, religious, public service and other groups that often provide services, especially of a spiritual and emotional nature, that governments cannot."

Vile's public service activities have included moderating area political forums, teaching Sunday school classes in three different churches over a period of 30 years and leading a Bible study for immigrant families for more than 10 years. He has been a pastor and adult Sunday school teacher at Beech Grove Cumberland Presbyterian Church since November 2001.

Owen, a rising senior from Murfreesboro, participated on a medical mission to rural Kenya to help lepers and a mission to Beirut, Lebanon, to assist more than 700 Syrian and Iraqi refugees. Over the 2018 summer, Owen will perform another medical mission in Santa Cruz, Bolivia.

He is a volunteer minister at his church, New Song Christian Fellowship in Nashville, and he aspires to attend medical school so that he may continue to serve the underserved at home and abroad. On April 23, officers of the MTSU chapter of Phi Kappa Phi Honor Society voted him to the chapter board with the title of Student Vice President.

"I am humbled to be honored in the name of the great man, the late Rep. Harold Love Sr., whose compassion and sacrificial generosity greatly inspire me to pursue the same," Owen said.

The Harold Love Outstanding Community Service Award was established in 1991 in honor of Rep. Harold Love Sr., a former Metro Nashville councilman and long-time state legislator who championed K-12 education and higher education throughout his tenure.

Each of the five faculty and five staffers who were selected from across the state by both academics and the general public will receive a $1,000 stipend from the Tennessee Higher Education Commission.