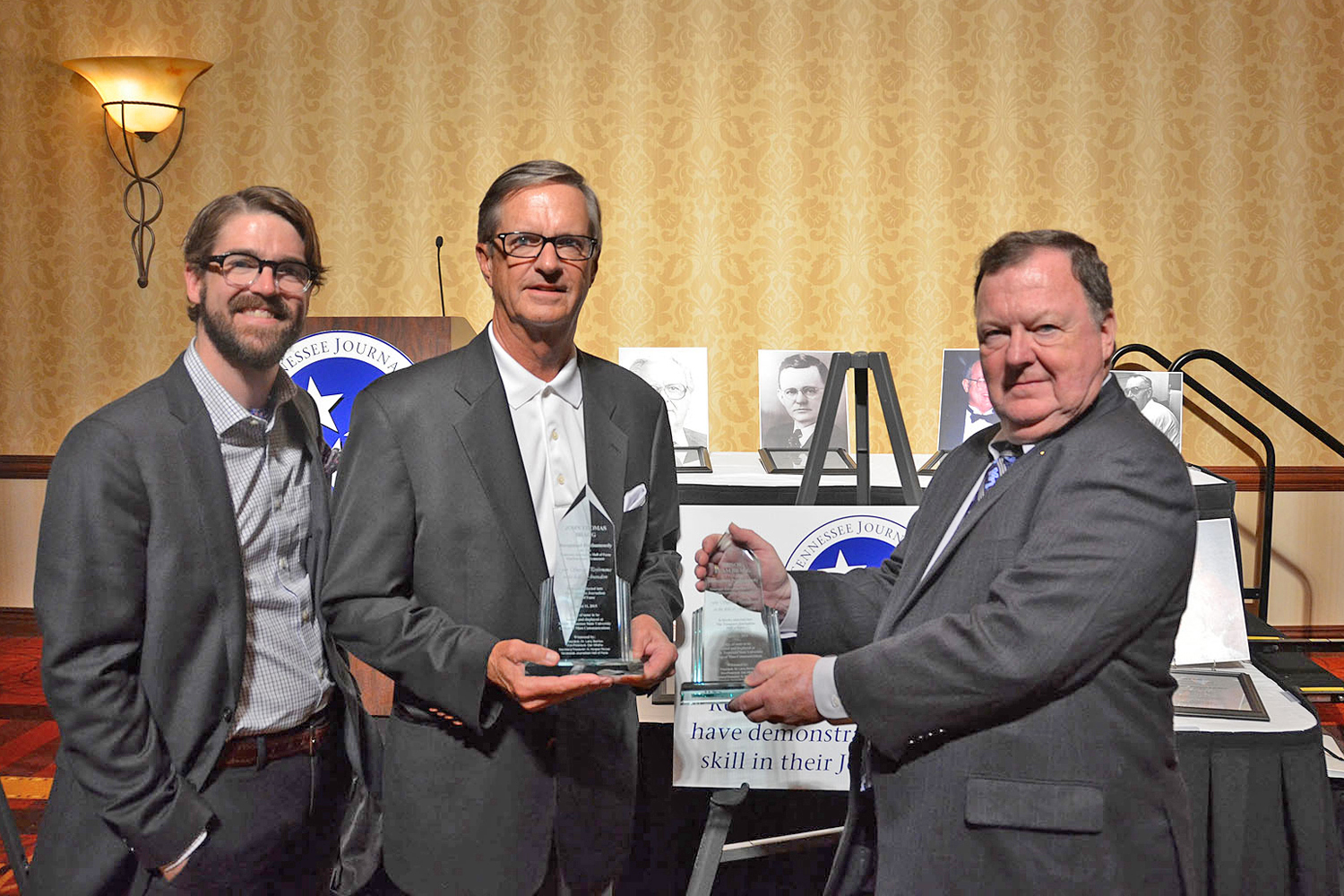 Former Murfreesboro Mayor Tommy Bragg was humbled and delighted to accept the awards for his late father and grandfather during the Class of 2015 induction ceremony for the Tennessee Journalism Hall of Fame.

The two generations of publishers -- former state Rep. John Bragg and his father Minor Elam Bragg -- were among nine posthumous inductees to be honored at this year's ceremony, held Tuesday afternoon at the Embassy Suites Hotel and Conference Center in Murfreesboro, Tennessee.

So perhaps it was fitting that two more generations of Braggs -- Tommy and his adult children John III and Beth -- attended the occasion to recognize their ancestors' legacy. Minor Bragg and John Bragg left their marks on journalism through the elder's creation and stewardship of the Cannon Courier and Rutherford Courier and the younger's work to develop the state's open meetings laws as a state lawmaker.

"If my dad taught me about public service, my granddad and my grandma taught me about business, how to make living," Tommy Bragg said in accepting his grandfather's award. "It's a pleasure to accept this on behalf of 'Paw Paw.' I'm greatly honored (and) I know my family is."

This was the third class of inductees and first in which all recipients were recognized posthumously. The ceremony came in conjunction with the 67th annual Tennessee Association of Broadcasters conference.

WSMV-TV longtime news anchor Demetria Kalodimos emceed the program, with family and friends of the honorees on hand to accept the awards.

Another inductee with a strong local connection was iconic sports journalist Grantland Rice, who was born in Murfreesboro and worked at regional newspapers including The Nashville Tennessean before moving to New York to continue a legendary career as a syndicated columnist.

Accepting the award on his behalf was longtime former Tennessean sports writer and columnist Joe Biddle, who noted that Rice was "ahead of his time" and whose first name dons the masthead of an ESPN-affiliated website today, a testament to his lasting influence.

"I'm honored to even be associated with Grantland Rice," Biddle said. "He put sports writing on the map" during the first half of the 20th century and was often referred to as the dean of sportswriting in America.

The Tennessee Journalism Hall of Fame is an independent partner with MTSU's College of Mass Communication, which houses the hall in its Center for Innovation in Media inside the Bragg Mass Communication Building on the MTSU campus.

Other members of the 2015 class included:

• Kent Flanagan, a native Texan and veteran Associated Press executive who practiced journalism on various platforms. Accepting the award on his behalf was his widow, Janet Flanagan.

• Jack Knox, a nationally recognized editorial cartoonist who practiced his wit and biting commentary in three of the state's four largest cities. Accepting the award on his behalf was his son, Brit Knox.

• Roy McDonald, whose bigger-city publishing career traces back to an advertising sheet he started to promote his grocery business in Chattanooga. Accepting the ward on his behalf was his grandson, Roy McDonald Exum.

• Bob Parkins, a small-town dairyman who grew his rural West Tennessee newspaper from scratch through merger. Accepting the ward on his behalf was his son, Victor Parkins, and widow, Dorris Parkins.

• John N. Popham III, a native Virginian who landed in Tennessee to cover the South and civil rights for The New York Times and stayed. Accepting the ward on his behalf was his son, John Popham IV.

• Drue Smith, a trailblazing woman who started in newspapers before switching to become a respected and colorful broadcast political reporter. Accepting the ward on her behalf was her daughter, Drucilla Smith Fuller.

Hall of Fame inductees can include reporters, writers, editors, publishers, news directors and other managers, as well as those who have excelled in advertising or public relations and journalism, advertising and PR education.

For more information about the Tennessee Journalism Hall of Fame, visit its website at http://www.tnjournalismhof.org or contact Hooper Penuel, TJHOF secretary, at 615-347-1672.