The Center for the Arts presents the comedy BEYOND THERAPY 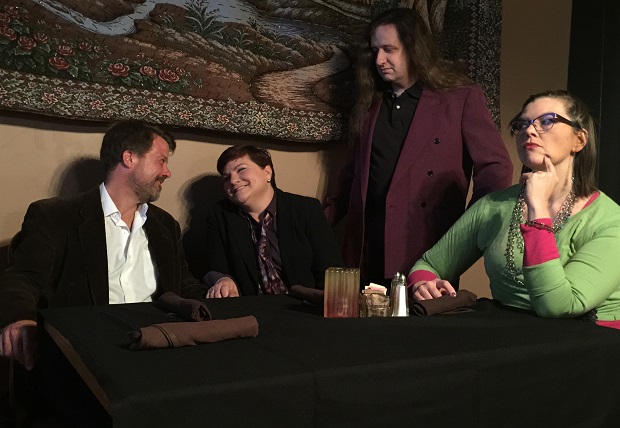 The Center for the Arts presents Christopher Durang's comedy BEYOND THERAPY, June 17 - 26, 2016. Filled with marvelously insane characters, screwball humor, and Durang's trademark observations of contemporary American society, Beyond Therapy is just what the doctor ordered: an evening of non-stop laughter! The award winning comedy is directed by George Manus, Jr.

Beyond Therapy is a quirky comedy about a lonely woman (Prudence) who replies to a personal ad and meets an eccentric, outspoken bisexual man (Bruce) who wants Prudence to be the mother of his children... And this is five minutes into their conversation. If Bruce sounds like he needs to be in therapy, he is. So is Prudence. However, both of their therapists are even more mentally messed up than the distraught main characters.

The cast features two Nashville actors: Memory Strong as the lovelorn Prudence and Matt Smith as Bruce, who are a couple both on and off the stage. Heather Lanier is appearing as Charlotte, the psychiatrist with a Snoopy dependency, and RJ Polito plays Prudence's therapist who has a problem with boundaries. Zach Parker is portraying Bob - Bruce's male lover. Fernando Ochoa rounds out the cast as Anthony - the besieged waiter.

Prices are $15 for adults; $13 for seniors, students and military. Please note: this show is rated "R" for adult content and language.

About the Center for the Arts in Murfreesboro:

Read more from:
News
Tags:
Beyond Therapy, Center for the Arts
Share: