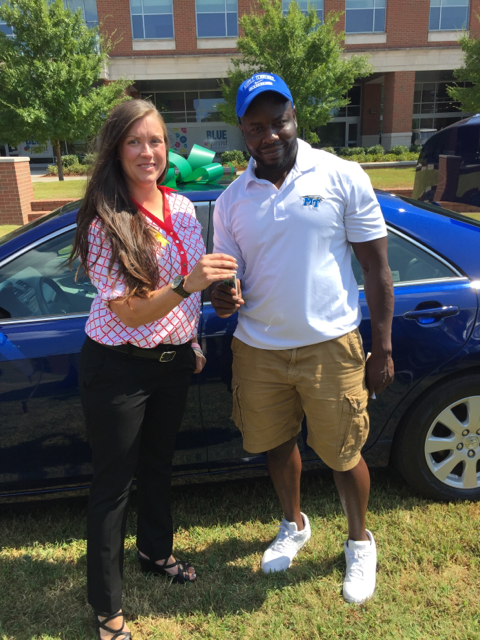 One of the things people need today is a reliable way to get around. A local man is getting that, thanks to the efforts of two major players in the automotive repair industry.

Service King Collision Repair Centers® and State Farm Insurance® have joined forces for the Great American Recycled Rides Giveaway. The keys to several vehicles have been turned over to deserving individuals in 14 cities across the United States.

A ceremony recently held in Murfreesboro provided former U.S. Marine and current MTSU student Oketa Ojok with a 2009 Toyota Camry Hybrid to help him get back on his feet.

Recycled Rides is a unique community-action initiative through which insurance companies, collision repairers and local non-profit organizations unite to provide deserving individuals and families with the gift of a fully restored vehicle. In its celebrated history, the National Auto Body Council (NABC) has donated more than 1,000 vehicles since the program's inception in 2007.

Service King, which is celebrating its 40th Anniversary in 2016, has a longstanding partnership with the NABC and Recycled Rides. In 2015, the company donated 15 vehicles through the program while contributing more than $500,000 to dozens of non-profit organizations across the U.S.