The Late Doug Young To Be Honored By City Schools Foundation 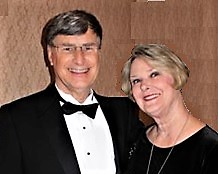 The 12th Annual Excellence In Education Gala sponsored by the City Schools Foundation is set for Friday evening, January 25, 2019 at MTSU. The honoree is the late Doug Young.

Young served as chairman of The City Schools Foundation as well as the Gala Chair for many years. His company, City Tile and Floor Covering, has been primary sponsors of Excellence in Education, The Back to School Dash and previously the Fashion Show. Andrew Young joined The City Schools Foundation board in 2018 and continues the legacy of support for public education that his father began.

Doug Young joins an extraordinary group of civic leaders to be honored by The City Schools Foundation for their support of public education at the 12th annual Excellence in Education Gala.

Reservations for the Gala are now available. Individual tickets may be purchased for $250 and sponsorships begin at $1,500. The event will spotlight Overall Creek Elementary. Overall Creek, A Tennessee Designated STEM School, integrates STEM curriculum with project-based learning across all subject areas and programs both inside and outside the classroom. The school is home to over 1,000 students. Don Bartch, Principal and Raeshon Torres, Assistant Principal serve as the administrative team for the school.

The City Schools Foundation is a group of civic and business leaders banding together to benefit Murfreesboro City Schools' pre-Kindergarten through sixth grade students.

Most recently, The City Schools Foundation gave over $60,000 to Murfreesboro City Schools in the form of teacher grants. The Foundation will also give over $25,000 this year to schools for parity grants.