THE LEGEND OF POCAHONTAS at the Murfreesboro Center for the Arts 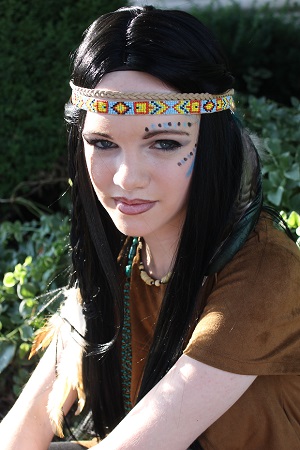 The Center for the Arts is presenting the regional premiere of THE LEGEND OF POCAHONTAS -written by Jon Lorenz and Robb Beus with orchestrations by three-time Grammy nominee, Hank Feldman, running August 12 - 28, 2016. Directed by Denise Parton, with Musical Direction by Heather Blackburn and Choreography by Brittany Griffin and Quantavius Rankins, the show tells the familiar story of the young Algonquian woman who helped bring two cultures together. Although the full truth of her life may never be known, this version attempts to bridge the gap between fact and legend. Witness her story in a brand new way - with a unique blend of theater and song - brought to life by a cast of 62 singers and dancers.

The cast of performers includes many teens and young adults from Murfreesboro and the surrounding area. The role of Pocahontas is portrayed by Delana Howard, who most recently graced the Center's stage as Gladys in 42nd Street. She is joined by Sam Downer and Jack Press as John Smith, Caleb Mitchell as Keokum, Cameron Anteski as Chief Powhatan, Jacob Sloan as John Rolfe, Andrew Hansen as her son Thomas, John David Tudor as Captain Argall, and Lydia McLaurin as the Queen.

Director Denise Parton has a great love for this show, and has been involved with it since its conception. "This show has always been close to my heart and reminds me of a quote by my favorite author Donald Miller 'If the way you live your life won't make a story meaningful, it won't make a life meaningful either. Live your life in a way that is worth telling stories about.' The cast has formed a tight knit group that has adopted as our motto 'one tribe - one love'. It is amazing to see the level of dedication and hard work they have brought to a show they were not familiar with when they started."

A contemporary pop musical, THE LEGEND OF POCAHONTAS follows the classic story of Pocahontas, but stays closer to the historical reality of her life. Pocahontas led a calm, peaceful life as a small girl, but when strangers arrive in her tribe's native land and attempt to take over, her life course changes drastically. This musical depicts the truthful account of the Algonquin Indians as they are invaded and taken over by Europeans, how Pocahontas later grew into an intelligent woman and became the wife of John Rolfe, as well as a diplomat between the Native Americans and European peoples. THE LEGEND OF POCAHONTAS combines history and storytelling with energetic choreography and beautiful, original, plot-moving musical numbers.

Tickets can be purchased on the center's website at www.boroarts.org; calling 615-904-2787; or stopping by the Center's box office at 110 W. College St. in downtown Murfreesboro. Prices are $15 for adults; $13 for seniors, students and military; and $11 for children. Group tickets are available. Performances are at 7:30 pm on Friday and Saturday evenings and 2:00 pm on Sunday afternoons.