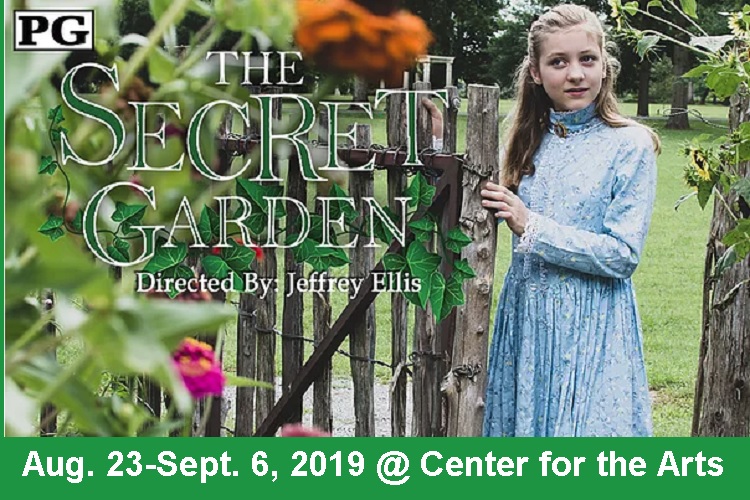 (MURFREESBORO) The Tony Award-winning musical The Secret Garden opens this coming Friday at the Center for the Arts, 110 W. College Street. It runs Friday and Saturday evenings at 7:30PM, along with 2:00PM Sunday matinees.

The musical by Lucy Simon and Marsha Norman is based upon the timeless children's novel by Knoxville's own Frances Hodgson Burnett - premieres at the Center for the Arts this coming Friday, August 23, 2019, and continues through Sunday, September 8, in a sumptuous production directed by longtime theater journalist Jeffrey Ellis.

Local stage favorites Lindsey Wortham, Mark David Williams, Robbie Craze and Caylor Miller lead the cast and they are joined by CFTA newcomers including Austin Jeffrey Smith and Bethany Cardenas in principal roles. Ashleigh Chambers and Andrew Hansen, most recently seen in CFTA's student production of Les Miserables, will take on the central roles of Mary Lennox and Colin Craven in the musical.

Burnett's classic tale of a young girl's journey from India to England in the early years of the 20th century radiates with the power of transformative love, redemption and hope that has made the book a favorite of readers since its first publication in 1911.

"The Secret Garden is quite unlike any other musical you may have seen. It's very dramatic, yet somehow fantastical, timeless yet contemporary. It's heartfelt and lovely: a story of love, loss, redemption and restoration. The Secret Garden tells a highly personal story that is universal and eternal -- one that will resonate with every member of our audience, regardless of their age," says director Jeffrey Ellis, who is senior contributing editor for BroadwayWorld.com and founder of Nashville's The First Night Honors.

"It will move you, it will leave its imprint on your heart and it is performed by a cast of actors of whom I am inordinately proud and delighted to have had the opportunity to collaborate with on this splendid show."

The Secret Garden is the story of young Mary Lennox (played by Ashleigh Chambers) who loses her parents to a cholera outbreak in India. She is then sent to live with her uncle, hermit Archibald Craven (Mark David Williams), who lives on a large, foreboding Yorkshire estate with his physician brother Neville Craven (Robbie Craze). Once she moves into the house, Mary finds a collection of lost and enchanting souls. Since her aunt Lily's (Lindsey Wortham) death, Archibald has closed the house to any family or visitors leaving his son, Colin (Andrew Hansen), alone. Colin is sickly and bedridden and carries the weight of his mother's death upon himself. When Mary discovers a hidden garden once considered the pride of her Aunt Lily, locked shut and overgrown with vines, she determines to restore it to its prior glory with the help of mystical young Dickon (Austin Jeffrey Smith), his sister Martha (Caylor Miller) and kindly, avuncular gardener Ben Weatherstaff (Gary Davis).

Accompanying Mary on her journey from India and playing integral roles in her life at Misselthwaite Manor are "The Dreamers," the name accorded the spirits of the deceased members of the British Raj who fell victim to the cholera epidemic. The Dreamers ensemble includes Stephanie Jones, Ro Coger, Callum Ammons, Jantu Moore, Reagan Fitzwater, Meredith Aydelott, Suzi Proctor Richardson, Shelby Smith and Teela Kelley. Bethany Cardenas and Spencer Germany are cast as Mary's parents, Rose and Albert, and Peri Watson and Carlos Santiago play her loyal Indian retainers, Ayah and Fakir. Leah Pagel-Williams is Mrs. Medlock, the housekeeper of Misselthwaite Manor.

About The Center for the Arts

The mission of The Center for the Arts is to enhance the quality of life in our community by providing cultural and economic enrichment through the arts.