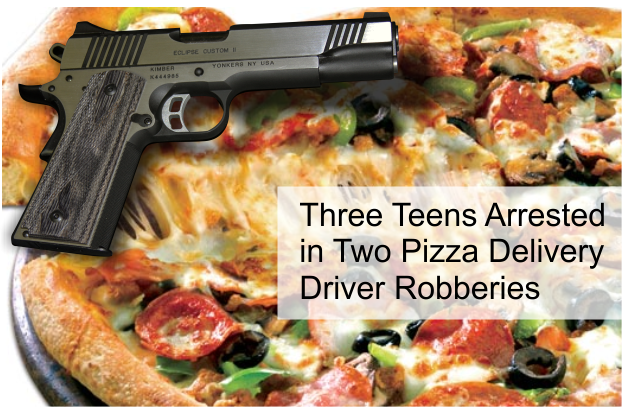 Two 18 year old Murfreesboro men and one 18-year old female have been accused of two recent pizza delivery driver robberies. Jarol Jiminez, Devon Fraizer and Ariana Lloyd have each been charged with two counts of aggravated robbery. The robberies occurred this past March.

Police say the robberies occurred in both Murfreesboro and Smyrna. The cell phone number that was used to call Papa Johns to request a delivery prior to the robberies was allegedly the number belonging to Lloyd, who was also arrested.

During questioning of Lloyd and Fraizer, they reportedly made incriminating statements about their involvement in the robberies. The report went on to state they identified a third suspect called "Homi" or "Homicide." That third suspect turned out to be Jarol Jiminez. Jiminez was also seen on a video surveillance camera trying to sell two cell phones that were taken during the holdups, according to the report filed by police.

Police searched a car belonging to Ms. Lloyd and discovered two stolen pistols, a silver mask, a BB gun, several cell phones and an iPad. The car was then turned over to her father.

A fourth suspect was also arrested and accused of being involved in the Smyrna pizza delivery robbery. Because the fourth subject is a juvenile, WGNS cannot release their name.