Three speakers, 2,641 grads are ready for MTSU's May 4, 5 commencement events 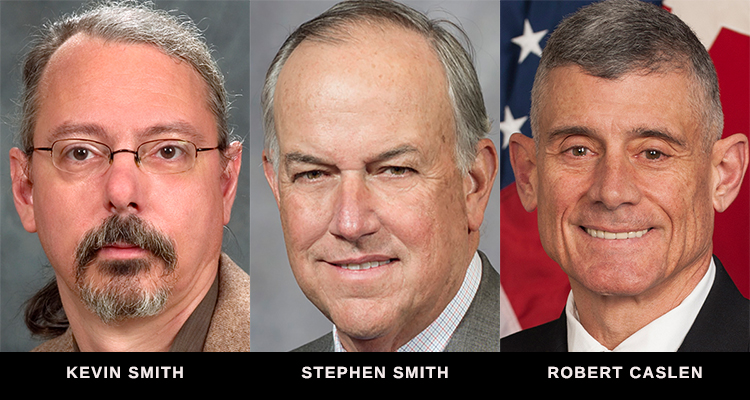 A trio of leaders will help 2,641 new MTSU graduates reach their educational goals in three spring 2018 commencement ceremonies set this Friday and Saturday, May 4 and 5.

Kevin Smith will address the university's separate ceremony for students earning their doctorate, master's and education specialist degrees. The College of Graduate Studies event is scheduled for 3 p.m. May 4.

Steve Smith, chair of Haury & Smith Contractors Inc., is the guest speaker for the university's 9 a.m. undergraduate commencement ceremony May 5.

Caslen, a former chief of the Office of Security Cooperation-Iraq, will speak at the 2 p.m. May 5 undergraduate ceremony.

Students in the College of Behavioral and Health Sciences, College of Liberal Arts, and the University College will receive their degrees in the May 5 afternoon event.

MTSU's commencement ceremonies are always free and open to the public. Friends, families and supporters who can't attend in person can watch each ceremony live online May 4 and 5 via streaming video at http://www.mtsu.edu/live.

The live commencement coverage will begin about 15 minutes before each ceremony starts; visit http://ow.ly/rwxOz for details about the video feed.

Guests attending each ceremony should arrive early to ease traffic congestion around Murphy Center and help ensure comfortable seating for everyone inside Hale Arena. Motorists should avoid Middle Tennessee Boulevard because of ongoing construction; route suggestions are available at http://www.mtsunews.com/graduation-info.

An official program, listing all the graduates, is now available at http://ow.ly/dfWk30bgTyW.

Graduate ceremony speaker Kevin Smith, a Department of Sociology and Anthropology faculty member since 1994, founded MTSU's anthropology program and is a nationally recognized anthropologist and an international expert in the archeology of middle Tennessee. He's also a member of the University Honors College faculty at MTSU.

In addition to his teaching and program leadership duties, Kevin Smith also is a mentor to the students he teaches, serving as director or reader in the past five years alone for more than 15 undergraduate senior and Honors theses, master's theses, and dissertations at MTSU and three other universities. He received the MTSU Foundation's 2017 Career Achievement Award, considered the pinnacle of recognition for the university's finest professors, last August.

Undergraduate morning speaker Steve Smith's list of community service work is a lengthy one, including service on the Metropolitan Nashville Planning Commission and Regional Transit Authority and chairmanship of the Metropolitan Nashville Parks and Recreation Board of Directors. A member of the Society of International Business Fellows, Steve Smith was inducted into MTSU's Blue Raider Sports Hall of Fame in 2004 and spearheaded the successful effort to raise $5 million to construct the university's new baseball facility.

Steve Smith received the Jennings A. Jones Champion of Free Enterprise Award from MTSU's Jones College of Business in 2010 and was the 2013-14 recipient of MTSU's Distinguished Alumni Award for Service to the University. In addition to his longtime involvement in political fundraising, Smith is a five-term president of the Tennessee Walking Horse Breeders and Exhibitors Association, won 10 World Championships as a rider and was inducted into the Tennessee Walking Horse Hall of Fame in 2001.

Undergrad afternoon speaker Caslen, a graduate of West Point, has served as commander of the Combined Arms Center at Fort Leavenworth, Kansas, which oversees the Command and General Staff College and 17 other schools, centers and training programs located throughout the United States; commanding general of the 25th Infantry Division (Light) and commanding general of the Multi-National Division-North during Operation Iraqi Freedom; and deputy director for the War on Terrorism, J-5, The Joint Staff. His service also includes executive positions during service in Haiti and Honduras and in Operations Desert Shield/Desert Storm.

MTSU's Graduation Committee noted that all graduating students must stay for their entire commencement ceremony. Each ceremony may last up to two hours.

Graduation information -- including links to maps and driving directions to MTSU, cap-and-gown information, official photographs and contacts for the Registrar's Office -- is available anytime at http://www.mtsunews.com/graduation-info.