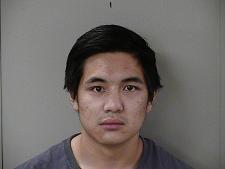 One full pound of marijuana was seized by police at a home on Monty Court in Murfreesboro. The drugs were seized shortly after police say they observed 21-year-old Kevin Lengphounpraseut fail to obey a traffic light on Joe B. Jackson Parkway at Richard Reeves Drive.

During the traffic stop, the 21-year-old man allegedly told police that he had a pound of weed at his house. The subject then told police they could go to his house at 213 Monty Court to retrieve it.

Vice detectives met with patrol officers at the house to assist in the investigation. A police report shows that Lengphounpraseut voluntarily got the two bags of marijuana for police and informed officers that he has been purchasing pounds of weed for $1,000 for the purpose of reselling it.

Needless to say, the man was arrested on felony drug charges and transported to the local jail for booking.