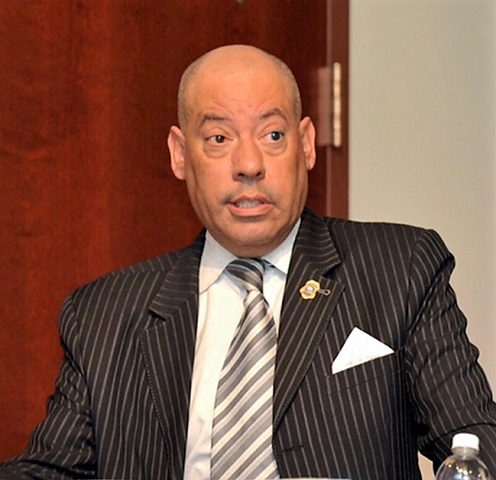 The Tennessee Bureau of Investigation director stressed leadership qualities -- but not on-the-job stress in solving crimes -- in a talk with MTSU students, faculty and staff at the Omicron Delta Kappa True Blue Leadership Day.

MTSU Alumnus and TBI Director Mark Gwyn discussed culture, the climate of the country following racially charged incidents in Ferguson, Missouri, Baltimore, Maryland, and Baton Rouge, Louisiana, job prospects and how, in his opinion, TBI stands for "truth, bravery and integrity" as well as the name of the agency he has served for 13 years.

The daylong event, held Friday (April 7) in the Paul W. Martin Sr. Honors Building, brings noted practitioners from a variety of professions to share their leadership experiences with MTSU students and faculty.

In addition, to Gwyn, other speakers included:

The ODK True Blue Leadership Day highlights the core values of the "True Blue Pledge" by educating participants about multiple aspects of leadership. ODK is a national honor society that emphasizes both academics and leadership.

"Truth, bravery and integrity is a lot more important than saying I'm a TBI agent," said Gwyn, who is in his third six-year appointment as director and also serves as president of the Association of State Criminal Investigative Agencies board of directors.

"My commitment to leadership is so important," he added. "You must have ongoing leadership training in whatever position you hold."

Later, he shared how servant leadership involves an officer becoming "the best agent I can be in law enforcement."

Senior Lindsay Ruhter of La Vergne, Tennessee, one of a number of criminal justice majors attending Gwyn's session and a Rutherford County Sherriff's Department employee for about a year, said she "really liked the fact he (Gwyn) believed in servant leadership and that's what he enforces."

Junior criminal justice major Zach Espino of Big Sandy, Tennessee, said Gwyn's talk provided "good advice -- something to live by. I like what he said about culture. It is at an individual level, not the agency."

Gwyn fielded questions from the audience about careers in the TBI and one regarding the recent nationwide Amber Alert involving a teenager from Columbia, Tennessee.

"When people come to the TBI, they stay," he said, citing only a 1.85 percent turnover rate. His recommendation: apply and first work in local law enforcement, get an entry-level TBI position or serve as a TBI intern.

Marion Gwyn, a specialist in MTSU's Information Technology Division and sister-in-law of Mark Gwyn, was among audience members.