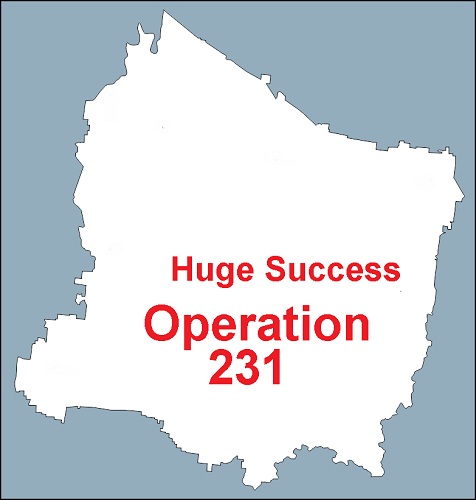 Joint operation between RCSO and THP

The greatest offense was speeding. 31 per cent of the tickets were for traveling above the posted speed. 51 persons fell into that category.

A deadly moving violation took second place--texting while driving. 31 offenders or 19 per cent fell into that group.

There was a significant drop for the third and fourth violations: no proof of insurance citations were written on 16 motorists and 15 were tickets for not using seat belts.

Five motorists were stopped for driving with a revoked license.

There were two tickets issued for crashes during OPERATION 231.

The lowest number of tickets were Driving Under the Influence (DUI) and the Child Restraint Law. There was one citation issued in each of those.

The highway was chosen because of a high number of traffic fatalities and injuries.

Officers from the three agencies, who are part of the sponsoring Rutherford County Traffic Safety Task Force, wrote 162 traffic related citations during the five-hour event.

The citations included one DUI and 50 speeding offenses.

Murfreesboro Police Capt. Cary Gensemer, who originated the Rutherford County event, said from his department's perspective, the operation was a huge success.

He commented, "Our eight officers were able to take 112 enforcement actions during the five-hour period. The visibility alone was a huge deterrent. It seemed that every half mile, a police vehicle could be seen on a traffic stop."

During the time period covered, only two traffic accidents occurred on the highway in the city limits.

Gensemer noted, "It is mere speculation on my part but I believe the increased law enforcement activity had had motorists very aware of their driving behavior."

You could say that OPERATION 231 was such a success, that you could be seeing it come to another highway near you!