Two Arrested for Obstructing Highway After Police Respond to Gunfire 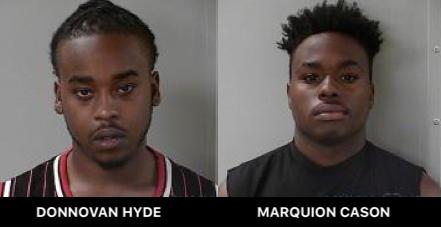 When the officers arrived, they saw a crowd of folks in the roadway and Officer Gibbs reports hearing gun shots. As they got closer to the group in the middle of the roadway, they were given commands to move.

Officer Gibbs made contact with 21-year old Donnovan Hyde of Searcy Street, who he reports resisted arrest and it took another officer's help to bring him into custody. Officer Hall reports 19-year old Marquion Cason of Cypress Drive was also arrested with the help of another officer.

Both men face charges of obstructing a roadway and resisting arrest. Hyde was allegedly found with a small amount of marijuana and rolling papers. He was also charged with simple possession and drug paraphernalia.