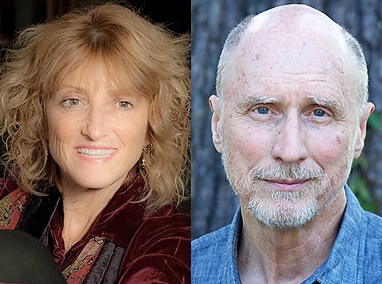 A pair of authors will be at MTSU at 1:00 o'clock and 3:00PM Monday (10/17/2016) afternoon for the Annual Southern Festival of Books. The public is encouraged to hear South Carolina's Poet Laureate Marjory Wentworth and Pulitzer Prize fiction winner Robert Olen Butler. They will speak in MTSU's new Student Union Building (1768 MTSU Blvd., 2nd floor, Parliamentary Room). The event is arranged in part by the university's Virginia Peck Foundation Trust Fund.

A searchable, printable campus parking map is available at http://tinyurl.com/MTSUParkingMap. Off-campus visitors attending the events should obtain a special one-day permit from MTSU's Office of Parking and Transportation at http://www.mtsu.edu/parking/visit.php.

Wentworth is a five-time Pushcart Prize nominee for her poetry, which has been published in collections that include "Noticing Eden," "Despite Gravity" and "The Endless Repetition of an Ordinary Miracle." She also is the co-writer of "Taking a Stand: The Evolution of Human Rights" and author of the prizewinning children's story "Shackles" and is on the faculty at The Art Institute of Charleston.

Poet Laureate Marjory Wentworth's reading and discussion at 1:00 o'clock Monday afternoon is co-presented by the Tom T. Hall Writers Series in MTSU's College of Media and Entertainment. It will feature her newest work, "We Are Charleston: Tragedy and Triumph at Mother Emanuel," with Herb Frazier and Dr. Bernard Powers.

"We Are Charleston," which focuses on the history of Mother Emanuel African Methodist Episcopal Church and the aftermath of the June 2015 massacre of nine of its members, will be for sale following the discussion. Wentworth will be on hand to sign copies.

Pulitzer Prize fiction winner Robert Olen Butler has published 16 novels, including "The Alleys of Eden," "Sun Dogs," "Countrymen of Bones" and his newest, "Perfume River," as well as six volumes of short fiction. He is the 2013 recipient of the F. Scott Fitzgerald Award for Outstanding

Achievement in American Literature, winner of two Pushcart Prizes and has also received both a Guggenheim Fellowship in fiction and a National Endowment for the Arts grant.

In addition to a stint writing screenplays for Hollywood, Butler is a Francis Eppes Distinguished Professor in the Michael Shaara Chair in Creative Writing at Florida State University.

Butler's 3:00 o'clock talk is co-presented by MTSU's English Department, will feature a reading from his short-story collection "A Good Scent from a Strange Mountain," which received the 1993 Pulitzer Prize for fiction. Butler also will be available after the discussion to sign copies of the book, which will be available for purchase.

The Tom T. Hall Writers Series in the College of Media and Entertainment at MTSU celebrates songwriters, authors, poets and screenwriters and offers students, faculty, staff and the public a chance to learn more about the creative process as well as the business end of success.

The 28th annual Southern Festival of Books: A Celebration of the Written Word is scheduled this weekend, Oct. 14-16, at Nashville's War Memorial Plaza. More information is available athttp://ow.ly/241N3057s7h.