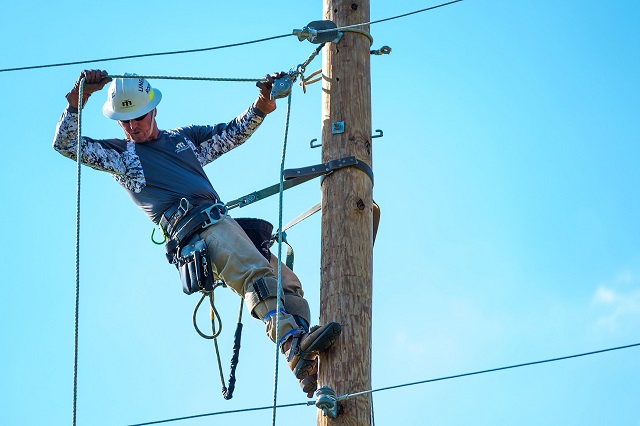 Murfreesboro Journeyman Linemen Jimmy Grant was part of that team, along with Danny Crawford, Chris Gossett and Nathan Neal from the Franklin office, and B.J. Bobo from the Woodbury office were joined by apprentice linemen Jonathan Fitzpatrick from Murfreesboro, along with Bobby Buttrey, Jamie Hazelwood and Brad Kincaid from the Franklin office, Rusty George from the Lebanon office--representing MTEMC at the competition.

Linemen work very hard every day, building and repairing lines, ensuring the overall reliability of the electrical grid in their service territories, said MTEMC President/CEO Chris Jones. They are the unsung heroes who stand at the ready to respond to outages caused by storms, accidents or anything else that may knock out the power. They are the ones who, through their tireless efforts, help ensure the system reliability of member-owned, not-for-profit electric cooperatives.

In the apprentice events, George won the A-1 connector change-out event; Kincaid brought home third in the skill climb and Fitzpatrick took second in the 2 phase insulator change-out and fifth in the overall apprentice category.

More information on the 2017 rodeo can be found at www.tnrodeo.com.