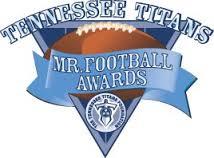 Blackman's Jauan Jennings and Oakland's Jack Jones are among the field of Tennessee Titans Mr. Football Awards finalists this year. The TSSAA says the awards will be presented on Monday, December 1st, at the Embassy Suites Hotel in Murfreesboro. A committee of statewide sports writers selected winners based on performance in the 2014 regular season. Academics and character were also taken into consideration. High school head coaches and members of the media nominated the finalists. This is the 30th year that the Mr. Football Awards have been presented to Tennessee's best high school football players.