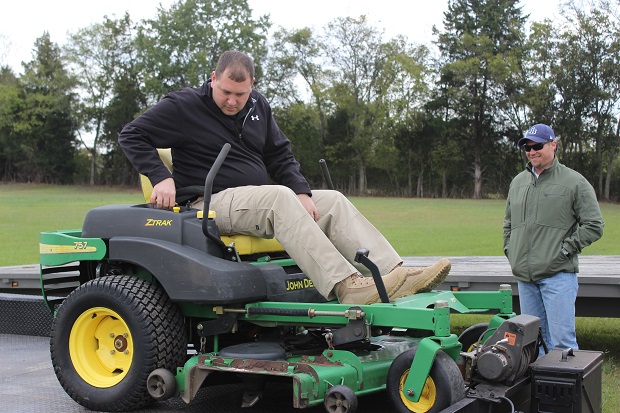 Past file photo of Sheriff Arnold sitting on a previously confiscated lawnmower that was recovered by law enforcement.

In a filing before U.S. District Court Judge Kevin Sharp, federal prosecutors note Arnold, former Chief Administrative Deputy Joe Russell and Arnold's uncle, John Vandeveer of Marietta, Ga., previously acknowledged a 14-count indictment "is plainly sufficient (on its face)" but now contend seven counts are meritless "because the wire communications at issue were not 'in furtherance of' the alleged scheme to defraud."

"This is ultimately a question for the jury to decide, and Arnold is free to present these arguments at trial," the prosecutors' filing states.

All three face a 14-count indictment stemming from an unauthorized plan to sell e-cigarettes to Rutherford County jail inmates through a company co-owned by Russell and Vanderveer, in which Arnold invested. From December 2013 to April 2015, when the media began reporting on the scheme, Arnold received $66,790, Russell $52,234 and Vanderveer $49,545, according to the indictment.

Judge Sharp recently said the trial will be held as scheduled, as long as he rules quickly on the defense motions.

The indictment contends the defendants set up a scheme to defraud Rutherford County of money and property and to defraud the county and its residents of "their right to honest services, through bribery and kickbacks," and it identifies several emails and one mailing transmitted "for the purpose of executing" the scheme.

In one email Russell sent to an Alabama jail seeking its business he stated the program had been "quite successful" in Rutherford County" and noted "we have a good relationship with the vendor which is why I am doing this favor for him."

Arnold forwarded another email to Russell and Vanderveer from a journalist with The Murfreesboro Post posing several questions such as whether "the sheriff's office or jail ha(s) a contract with JailCigs" and how much money has been paid to Rutherford County, in light of Arnold's statement to "TV reporters (that) some of the revenue from Jail Cigs goes into the county's general fund."

County officials have said no money from JailCigs made its way to the general fund.

Read the entire story by Sam Stockard in the Murfreesboro Post HERE.