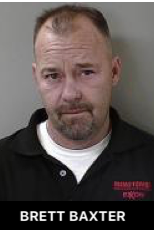 A 44-year old Unbridled Drive man faces various drug charges and DUI after being found by Murfreesboro Police asleep behind the wheel.

Authorities report they had to wake up Brett Baxter around 8:30 Saturday morning, who was sitting in the driver's seat of a pickup truck at the Shell gas station on North Rutherford.

Officer Gretta Ireland reports Baxter failed a field sobriety test and was arrested. After giving permission to search the truck, several items were found. They included a small plastic bag with 21 Vyvanse pills, six Xanex bars and a small bag with white power inside, which the suspect reportedly identified as cocaine. A half empty bottle of Captain Morgan whiskey was also discovered.