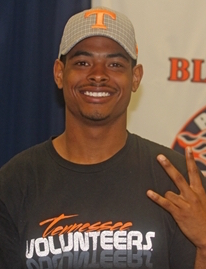 Former Blackman High School standout and University of Tennessee football player Jauan Jennings is facing several charges after an alleged incident at a graduation party May 30th. According to an affidavit of complaint received by NewsRadio WGNS, Jennings allegedly assaulted an Oakland High School student, and after damaging the car the teen was driving, took valuables from inside. The complaint was filed in the General Sessions Court of Wilson County.

According to the complaint, several people were at a graduation party in neighboring Wilson County on Simmons Bluff Road and Whipporwill. The juvenile victim reported Jennings pushed him twice, causing pain to his neck and back and placing him in fear for his safety.

The complaint went on to say as the victim tried to leave, Jennings threw a rock at a 2014 Infinity Q50, owned by the victim's mother. That allegedly caused damage to the hood and windshield of the car. Additionally, Jennings allegedly also took a cell phone, jacket and arm brace from the vehicle.

Jennings, a 6-foot-4 quarterback, won the Class AAA Mr. Football award last season as a senior at Blackman High School. He's been at the University of Tennessee since January.