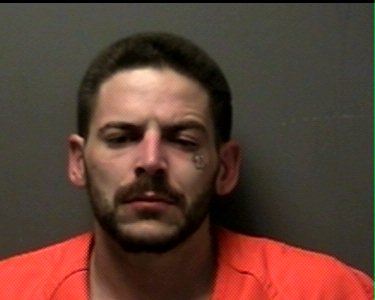 Sgt. Chris Owens reported that 30-year old Asa Gilbert of Smyrna, was wanted for stealing a gun from his father that he fired inside his father’s home, assaulting his parents, stealing vehicles and fleeing from police with passengers inside the car.

Murfreesboro Police saw Gilbert about 4 a.m. Monday morning driving a car he allegedly stole from his mother the night before. The spike strips were deployed on Northwest Broad Street near O’Reilly Auto Parts where Gilbert was taken into custody.

More on the Pursuit:

In the pursuit, Gilbert was said to be driving a 2006 Chevrolet HHR, maroon in color. While on Lascassas Pike in Murfreesboro, the vehicle hit 90-miles per hour, according to Murfreesboro Police. Gilbert allegedly drove into the oncoming lane of traffic at one point with the lights turned off.

One of two arrest reports filed by the MPD stated:

“At the intersection of Pitts Lane and East Northfield, the vehicle crossed over and drove down the oncoming lanes. It continued at a high rate of speed, almost striking a truck at the intersection of East Northfield and North Tennessee Boulevard. The vehicle continued at a high rate of speed through red traffic lights and then turned right onto Ash. It continued onto South East Broad Street, almost striking another vehicle, and headed North West.”

The report also highlighted how Gilbert almost struck a stationary patrol car. It also suggested that after spike strips were deployed on Broad Street, the suspect reportedly swerved towards MPD Sgt. Luzader who was standing outside of his vehicle after throwing out the spike strips.