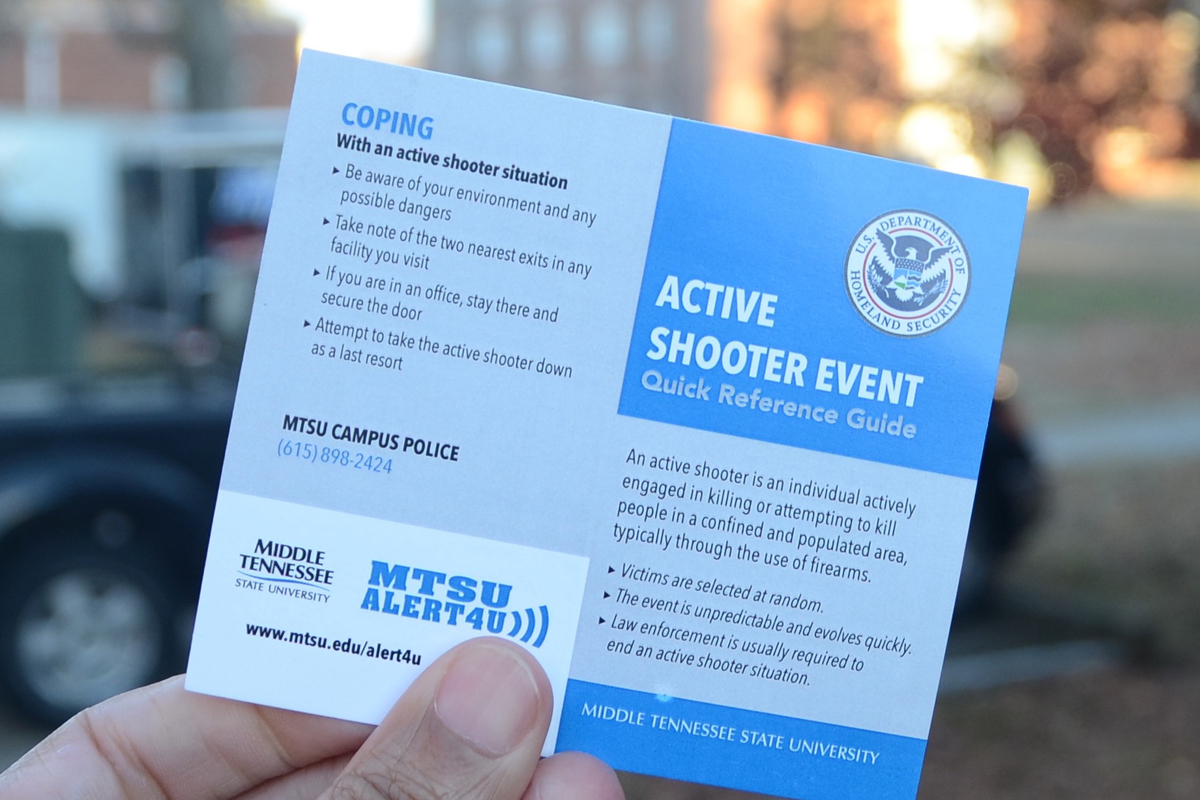 Middle Tennessee State University announced Thursday (Dec. 1) the creation and distribution of an active shooter guide as well as increased video surveillance and plans to reintroduce emergency call stations to the campus.

In addition to the pamphlets, 400 cameras are also being added to the MTSU campus so that police can see and record everything. MTSU vice president for information technology Bruce Petryshak (PEH-TRUH-SHACK) explained...

With the recent Ohio State University attack as the latest example of the security concerns facing campuses throughout the nation, MTSU's Division of Student Affairs and University Police Department have been working throughout the semester to update emergency response information located on its website at http://mtsu.edu/alert4u and share more specific guidelines for active shooter responses.

Recently ranked among the Top 50 safest large universities in the nation by the website collegechoice.net, MTSU has developed pocket-sized active shooter cards that summarize the U.S. Department of Homeland Security's "Run-Hide-Fight" guidelines that have been increasingly embraced by universities around the country, including Ohio State.

"It helps us provide some really important information to people before an incident so that hopefully in the throes of something serious happening, they will think about what they've (seen) and they will have foundational knowledge to make good decisions and keep them safer," University Police Chief Buddy Peaster said.

The active shooter cards provide brief summaries of basic steps to take under each phase of the "Run-Hide-Fight" protocol, such as having an escape route in mind when preparing to "run"; blocking entry and locking doors when you "hide"; and only "fight" as a last resort and when your life is imminent danger.

Dr. Deb Sells, vice president for student affairs and vice provost for enrollment and academic services, said the cards will be available while supplies last at key locations around campus such as the MT One Stop, Student Union, University Police Department and others for students, faculty and staff. The guidelines and an instructional video are also always available on the university's website at http://www.mtsu.edu/alert4u/active-shooter.php.

"We want to direct students to the cards that they can carry as a reminder, but more importantly to the website where they can view the videos and read (the guidelines) in more detail," said Sells, noting that such guidelines are not only applicable for college campuses, but for many other public spaces such as malls and other venues.

Starting next year, the cards will be given to all new freshmen during the CUSTOMS student orientation sessions held in summer before the start of classes. All new students are required to attend a CUSTOMS session.

At MTSU, alerts for an active shooter situation and other emergencies are sent via the university's Critical Notification System, which is operated by Rave Mobile Safety and has almost 27,000 registered users. Emergency messages are distributed via texts, emails and phone calls as well as posted to the university's website and social media accounts.

While students, faculty and staff are automatically registered to receive Rave email alerts, only those who've added phone numbers to their notification preferences will also receive a text message and/or recorded phone call. All current MTSU students, faculty and staff can verify and update their Rave notification preferences by using their PipelineMT usernames and passwords at www.getrave.com/login/mtsu.

The campus community can also download the Rave Guardian app to their smartphones. The app includes a panic button feature that connects directly to police as well as a timer feature that allows users to designate police and/or family and friends as "guardians" who can remotely check on their status if traveling alone. Full details are available at http://www.mtsu.edu/alert4u/guardian.php.

Sells said the university will continue to reminds students, particularly incoming freshmen, that life on a college campus is much different than high school. That means, among other things, that students should take time to familiarize themselves with emergency protocols found on the university's website and check their Rave registrations and preferences to ensure they receive emergency messages quickly.

"We tried to focus on areas where we've had serious incidents before or where our statistical information has shown we've had a number of incidents," Peaster said, noting that exterior cameras will soon be installed around Murphy Center, Floyd Stadium and Womack Lane Apartments.

Tom Wallace, associate vice president for information technology, has overseen the camera project, which has already resulted in close to 400 camera installations around campus with the next phase adding up to 100 exterior additional cameras, he said. Interior cameras are also planned for certain locations, such as the Science Building.

"This is just an extension of enhancing the security on campus," said Bruce Petryshak, vice president for information technology and chief information officer at MTSU. His Information Technology Division manages the centralized surveillance system, which is accessible anytime by authorized University Police personnel. The long-term plan is to have all campus entrances and exits covered.

An additional security measure will be the installation of emergency call stations, Petryshak said. Mounted on clearly marked poles, the call stations will not only allow people to make emergency calls directly to police, they will also have multiple cameras attached as well as speaker capabilities for emergency announcements.

The first such station will be installed at a bus stop near Womack Lane, with plans to install several other stations throughout campus.

Hear the full soundbytes below:

Cheif Buddy Peaster talks in length about changes and the need (1 min and 54 sec):

The University Police Department is an independent law enforcement agency recognized as such by the Federal Bureau of Investigation and the state of Tennessee. The department currently consists of 44 commissioned police officers, six full-time dispatchers, approximately 25 part-time student workers, plus full-time administrative staff. University Police operates 24 hours a day, 7 days a week, and is located at 1412 E. Main St.

Members of Raider Patrol, which consist of part-time, student employees, provide safety escorts and also check and secure doors and windows of university buildings, as well as assist and support police personnel with parking for events and other special assignments as needed.