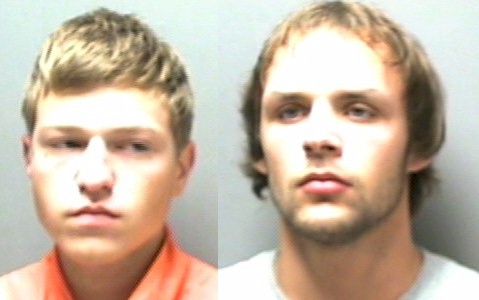 Two suspects charged with fatally shooting a man in July of 2011 outside his Burks Hollow Road home will appear in court on Monday for an arraignment and later on August 28th to file a plea. Rutherford County Sheriff Robert Arnold says victim Kevin Barrett, 45, died after being shot while trying to run away from the suspects in southern Rutherford County.

A woman at Barrett’s home told Deputy Daryl Duncan that Barrett was hauling hay when two men entered the house, pointed a gun at her, pushed her down and demanded bank information. When Barrett entered the home, he saw the suspects and seconds later was shot. After the shooting the suspects fled the scene, apparently taking the victims’ two vehicles.

Sheriff Arnold says detectives and deputies spotted the vehicles and pursued the suspects near University Gables apartments across from Walmart on Rutherford Boulevard. Both suspects jumped out of the vehicles and fled. Murfreesboro Police Detective Reco Hathaway, with help from Officer Aaron Price, apprehended Lamendola within minutes in the back of the apartment complex.