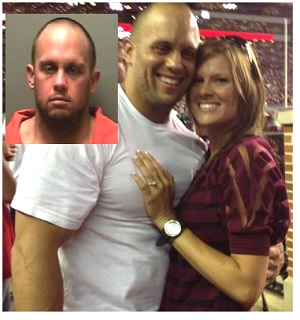 Larger picture is the couple during happier times. Insert is a Rutherford County Sheriffs Office' mugshot of David Pearman taken as he was being booked for murdering his wife of approximately four-months.

The Murfreesboro man convicted in the Valentine's Day 2013 murder of his newlywed wife saw his appeal denied by the Court of Criminal Appeals in Nashville this past May. This month, the courts have once again shot down his case.

Jacob Pearman originally argued six reasons his conviction should be overturned this past May. Some of the stated arguments included the trial court denying his motion for a change of venue and another suggested the courts abused their discretion in declining to strike a juror for cause. All six motions were denied by the appeals court in Nashville.

Pearman choked and beat his wife, Carla, to death in 2013. He admitted to how he killed her during a police interview after he was arrested.

Pearman worked as a physical trainer during his short lived marriage with Carla. At the time of the murder, he was an avid bodybuilder.

He was sentenced to life in prison by Circuit Court Judge David Bragg after the jury found him guilty of first-degree murder in early 2015.

This month, his case was once again struck down by the courts. On Thursday, September 21, 2017, the Tennessee Supreme Court denied his appeal from moving forward. Ironically, that denial fell on Pearman's 35th birthday (9/21/17).

Pearman will remain behind bars for life. However, he will be eligible for parole at age 90 in year 2073.