UPDATE: Woman Allegedly Stabs Man After Telling Him to Get Undressed for a Massage 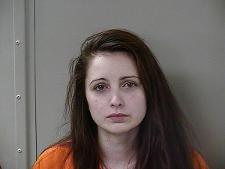 WGNS has learned that the 27 year old woman arrested and charged with attempted first degree murder during an alleged massage this past year is scheduled to file a plea in court this August.

Elsa Crafford of Murfreesboro was charged attempted first degree murder in October of 2018. The charge came after police responded to Parkview Flats on Bradyville Pike. Once at the apartment complex, officers learned that a man was stabbed in the neck. Employees of the apartment were rendering aid to their tenant Matthew Burchell until paramedics arrived. The victim advised that Crafford stabbed him.

Police searched for the woman and found that she fled the scene in a car and later wrecked on Highway 99 at Jackson Ridge Road.

Once caught, Crafford reportedly told officers that the victim was an acquaintance of hers and that she told him to get undressed for a massage. After the victim laid down on his stomach she got on top of him and stabbed him once in the neck with a knife, according to the MPD Arrest Report.

Her plea date has been set for August 27, 2019. Again, she is facing the charge of attempted first degree murder.